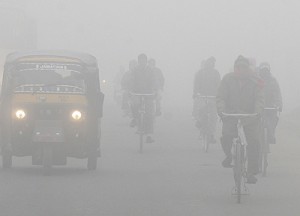 NEW DELHI: The season’s first dense fog made a belated appearance on Monday and brought about the chill that many were expecting from the Delhi winter. The Met department warned that the fog was expected to intensify by Tuesday and cover the entire city, leading to further flight and train delays.”Dry weather has been prevailing over northwest India since the beginning of December. The maximum and minimum temperatures were near normal and shallow fog occurred over the region during the period on many occasions. However, by Sunday night the situation changed suddenly and drastically, leading to formation of dense-to-very-dense fog over many parts of Punjab, Haryana, Delhi, Uttar Pradesh and north Rajasthan,” said O P Singh, deputy director general, Delhi’s regional meteorological centre.

“The spatial extent and duration of this fog are likely to increase over the northwestern plains during the coming days with chances of very dense fog over isolated pockets,” he added.

Initially, the Met department had said dense fog was not likely to start before Christmas but with the impact of cyclones on the east coast now over, there was a very fast change in atmospheric conditions over north India, including Delhi.

“The winter pattern has not only revived very fast but there has also been heavy advection of fresh humidity in this region. In the absence of any significant wind flow and a stable atmosphereduring almost 36 hours between December 14 and 15, very dense fog formed late night on Sunday. This affected Delhi airport and parts of west and north Delhi. South and central Delhi had only shallow fog. Dense fog was also reported from Punjab, Haryana and west Uttar Pradesh,” said R K Jenamani, director in-charge,IGI Met.

The fog also brought about a distinct chill in the absence of any sunlight during the day. Delhi’s maximum temperature was 24.4 degrees Celsius, two degrees above normal, while the minimum was 8.8 degrees Celsius.

Visibility had started falling again by Monday evening due to fresh incursion of moisture in the atmosphere. “Models are indicating there will not be much wind on Tuesday and this fog spell will intensify further and may cover all of Delhi by Monday night and continue till at least 9 am on Tuesday,” said Jenamani.

A western disturbance is likely to affect the western Himalayan region and adjoining plains from December 21 which will result in light rain or snowfall at a few places over Jammu and Kashmir, Himachal Pradesh and Uttarakhand. Isolated light rain may also occur at one or two places over Punjab and north Rajasthan on December 22.