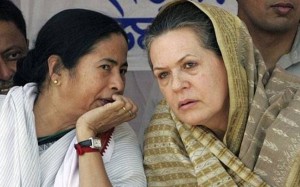 KOLKATA: With politics entering a new phase of alliance in Delhi – on an issue who will bell the cat, Modi or 10 Janpath, in face of stiff competition, West Bengal Chief Minister Mamata Banerjee eventually holds the key to regional alliance.
While CPI(M) seems to have got the worst, the Pradesh Congress leaders may have to toe a line without their consent.
After last Monday’s talks with Rahul and coming out without any yes or no, according to top party sources, Rahul may have turned a little negative about the proposal by now.
Sources said the prince told a few hand full it would be unwise the go against state’s interest by signing an alliance with CPI(M).
Interestingly, if this was the attitude of Congress high priest, implying that they may need TMC for an alliance in Delhi, the BJP central leaders may have a bigger plans with TMC back in power again.
Not only state’s new leadership has gone slow in attacking Banerjee, the Sdupta Sens’s TMC-linked scandal almost seems waning in terms of its politics-linked with unearned money.
This even prompted opposition in Bengal to suggest that “Trinamool leader may well have stuck a deal with BJP Government.’’
“This is how TMC has spread political confusion among opposition parties who are presently faceless to match Mamata Banerjee, they even do not have political shrewdness to keep everyone confused and she gains politically,’’ said a top political commentator, observing the plight of opposition politics in Bengal.
However, the sound of Election Commission that it would send a huge pack of Central Forces taking care of Bengal polls, rubs hopeless opposition with a little hope. “Barring a few package for BPL and even poorer, and no industry with a few industries have flown out of Bengal and spate deaths in sick tea gardens, she has almost nothing in her achievement,’’ commented another observer.
But still she holds the key to Delhi politics and a fiercely competitive Delhi keeps watching.