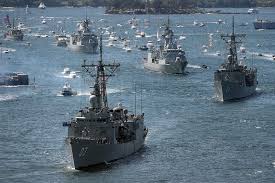 VISHAKHAPATNAM: President Pranab Mukherjee , the supreme commander of the three defence forces, inspected the International Fleet Review (IFR) at Vishakhapatnam on Saturday. Prime Minister Narendra Modi and Defence Minister Manohar Parrikar were also present during the ceremony.
During the review, Indian Navy will showcase its capability and technical superiority. Around 90 ships of Indian Navy are participating in the event. Over 50 countries are participating in the mega maritime meet.India shows Naval prowess at International

The five-day event began on Thursday with the inauguration of maritime exhibition and IFR village. Navies from 52 countries including China, Russia, USA, Japan, Vietnam, Israel, France, Britain and Australia are participating in the review in the Bay of Bengal.
At least 90 ships and vessels of the Indian Navy along with aircraft carrier INS Virat and INS Vikramaditya are the main attractions of review.Along with warships from across the world, Indian navy is displaying its firepower and blue sea capabilities in this event.