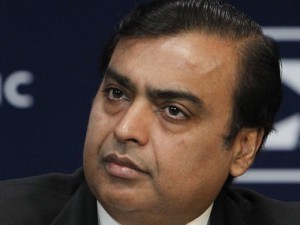 Mr Shanghvi, who added $489 million to his personal wealth to Rs 16.9 billion, became the second-richest Indian after Reliance Industries chairman Mukesh Ambani.
Only last year, Mr Shanghvi had seen a $926-million erosion in his wealth, but the buoyancy in the pharma sector helped him recover
Mr Ambani, on the other hand, lost $144.6 million in January, but is still the fourth-richest Asian billionaire, with a global ranking of 31.

Pune-based Cyrus Poonawala, promoter of the closely-held Serum Institute of India, saw his wealth fall by $1.4 billion to $8.7 billion in January. After he had added $4.9 billion to his wealth last year, doubling it to $10.2 billion.
Adani Group chairman Gautam Adani become poorer by $959 million to $4.5 billion, but is ahead of Eicher Motors promoter Vikram Lal, who saw a $161-million erosion in his wealth to $3.7 billion. Mr Lal has overtaken Pankaj Patel of Cadila Pharma and Benu Gopal Bangur of Shree Cement.
Pallonji Shapoorji Mistry, promoter of Shapoorji Paloonji Group, lost $919 million, taking his wealth to $13 billion as growth in the real estate sector continued to be subdued. In 2015, he had lost $1.98 billion.
Steel baron Laxmi Niwas Mittal, promoter of Arcelormittal, continued to see erosion in his wealth with global steel prices falling on the back of lower demand and Chinese dumping. Mr Mittal lost $556 million in January, taking his wealth to $8.8 billion.
He had become poorer by $4.6 billion to $9.5 billion in 2015. However, Mr Mittal overtook Mr Poonawala as the sixth richest Indian, with the latter seeing a faster erosion in his wealth.

Dubai-based Micky Jagtiani, promoter of Landmark Group, continued to see erosion in his wealth to $5.5 billion in January, becoming $268 million poorer. However, Mr Jagatiani improved his ranking to become the ninth richest Indian.
Desh Bandhu Gupta of Mumbai-based Lupin Ltd, who added $1.1 billion to his wealth last year, became poorer by $534 million in January , slipping to the 10th slot.