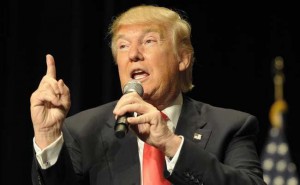 WASHINGTON: For months, mainstream Republicans have hoped that Donald Trump’s support was a mirage – a combination of high name recognition, unsustainable media coverage and support from irregular voters who might not show up in a primary.
Monday night, there was reason to believe their hopes just might be well founded. Despite leading each of the last 10 Iowa polls, by an average of 7 percentage points, Trump was defeated by Ted Cruz. Marco Rubio was in a strong third place.In the end, Trump came closer to taking third than to winning.
The result doesn’t necessarily leave us much closer to knowing who the eventual nominee will be. It probably signals the beginning of a protracted, three-way fight for the nomination. But the loss raises the possibility that Trump’s strength is at least partially an illusion; he may not be quite as strong as he looks.
Trump’s defeat won’t necessarily derail his campaign, as some have speculated. He leads by a wide margin in polling in New Hampshire, so he’ll have a strong opportunity to rebound.
Trump’s voters also appeared to turn out in large numbers. Many speculated that he might fail to turn out his supporters, but the turnout in Iowa was higher than most analysts had forecast, with 167,000 votes counted as of now – swamping the 122,000 votes from 2012.
Yet Trump still fell short. He lost voters who decided over the last month by a wide margin, and he took third place among voters who previously participated in the caucuses. Trump fared especially poorly among voters who decided over the last week – since his decision not to participate in the final presidential debate before the caucuses.
Cruz’s Narrow Path to the Nomination
For Cruz, the victory gives him a chance to forge a narrow but real path to the nomination. His strengths include strong support from self-described “very conservative” voters; perhaps the best organization in the race; and a strong fundraising apparatus. He could fare relatively well in South Carolina in a few weeks, and across the South on Super  Tuesday.
But his path to the nomination is still not an easy one. He will face full-throated opposition from many prominent Republicans, as was the case here in Iowa. And Cruz’s narrow victory was not especially impressive. It depended almost exclusively on strength among “very conservative” voters, who are vastly overrepresented in the Iowa caucuses. There was no primary state where “very conservative” voters represented a larger share of the electorate in 2012 than they did in Iowa.
He won just 19 percent among “somewhat conservative” voters and a mere 9 percent of the “moderate” vote.Cruz’s victory may bestow enough momentum to attract less conservative voters. But recent primary contests offer reason to be cautious about his prospects.

like Mike Huckabee and Rick Santorum never succeeded in broadening their appeal beyond their natural bases after winning Iowa, and Cruz will probably fall short of the nomination if he also cannot do so.
Rubio’s Big Night
Making it even more difficult for Cruz to broaden his appeal is Rubio. He finished in a strong third place, beating pre-election polls and nearly beating Trump for second in a state where Cruz’s base is at its strongest.
Whether Rubio’s showing will be enough to change the race in New Hampshire is hard to say – there isn’t much precedent for a logjam like the one we have in New Hampshire.
Four mainstream conservative candidates – John Kasich, Chris Christie, Jeb Bush and Rubio – have all been clustered near 10 percent of the vote in New Hampshire surveys.
If Rubio’s performance in Iowa bestows enough media coverage and credibility for him to break the deadlock, it would be a crucial turning point in the race.
A strong Rubio showing in New Hampshire could push several mainstream candidates out, freeing up endorsements and fundraising dollars that have sat on the sidelines. It would also allow him to consolidate the voters who have supported the mainstream candidates.It would bring about a true three-way race heading into South Carolina.