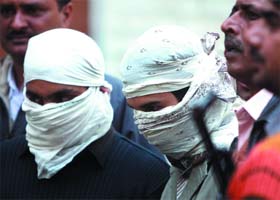 NEW DELHI :  A man has filed a police complaint that Rs. 7 crore was looted from his car in broad daylight in South Delhi today.
The complainant has told the police that he was going to the bank to deposit the money at around 9 am when a Maruti Wagon R suddenly stopped in front of his Honda City near the Moolchand flyover. A few men got off the Wagon R, the complainant said, and pointed a gun at those sitting in the Honda City.
The robbers then fled from the spot in Honda City, leaving their Wagon R behind. The police later found out that the abandoned car was a stolen one.