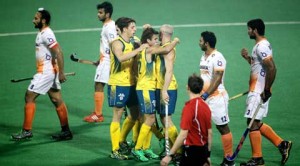 NEW DELHI : At the start of the Hero Hockey World League, India’s hockey skipper Sardar Singh had promised his side wouldn’t just make up the numbers but would surprise their opponents. Its unlikely anyone took him very seriously at the start of the tournament. After the first couple of defeats, one would be even less inclined to think so.
The draw against Germany on Monday was perhaps the first time, there appeared to be some validity to the skipper’s predictions. But on Wednesday, ten minutes into their game against defending world champions Australia and with a two goal to nothing lead, it is likely even Sardar would have been surprised.
The match eventually finished 7-2 to the Australians, but at least for the first quarter of the game, India looked like pulling off the biggest upset of the tournament. The match had got off to a fast start. India had put together their first good opportunity in the opening minute of the game courtesy a move by K Uthappa and Mandeep Singh. But while the chance came to nothing, the lead eventually came in the sixth minute.
Dharamvir Singh found space on the right, crossed to Birendra Lakra who shot on target from a tight angle. The goalbound attempt caught an Australian stick on the way to the net, but the umpires arms were pointing to the centerline all the same. Australia had a chance to pull things back when they earned a PC in the 9th minute, but PR Sreejesh cleared the high drag attempt. Australia would have known that India would come hard at them, but they still seemed unprepared for it. They made some surpringly basic errors including in the 10th minute when they left Yuvraj Walmiki unmarked on the left flank.
That meant Nikkin Thimaiah on the right turned past a defender and fired a hit at the goalkeeper, Walmiki was able to tip the ball with a single hand on the stick to make the scoreline even more improbable. But the Australians aren’t World champions for no reason. Their backs to the wall, Australia slowly took back control of the game. The Indians, meanwhile, much like an inexperienced runner who goes goes hard at the start of a marathon carried by adrenaline as much as anything, hit a wall. This one was quite literal, made up of massive Kookaburra defenders, who saw nothing in getting a bit physical where they needed to.
Two minutes before that, the Australians had got on the scoreboard. Affan Yousuf was dispossesed on the frontline and a PC was earned on the counter. Nicholas Budgeon made sure of the chance with a straight low drag.
Losing steam
The Indian defence unable to match the sustained pace of the Australians began to open up and in the 27th minute, Jason Wilson found himself unmarked next to the goal with a cross from 25 metres available. PR Sreejesh had left the goal two early and Wilson was able to dodge past him and level things. A few seconds from half time, India lost all advantage when Glen Turner flicked in a pass from the right flag area.
India were fading fast and the break did nothing to revive them. Indeed the second half saw them completely outplayed. Russell Ford extended the lead to 4-2 in the 41st minute. Simon Orchard smashed home from the top of the corner to cap off a counter four minutes later. Ford made it 6-2 when he tapped in a short backpass from Turner.
In between the carnage India had a couple of chances of their own. Walmiki only had Australia keeper between him and his second goal in the 48th minute but his shot was directed straight at the rushing Bazely’s midsection. India earned a PC right after Walmiki’s miss, but VR Raghunath’s strike was wide. Australia rounded off the their scoreline when Joss Whedon pounced on a free hit deflection in the 65th minute.
In other matches England set up a semifinal clash against Holland. England beat Belgium 1-0 while Netherlands edged a lacklustre Germany 2-1 in another quarterfinal. New Zealand recovered after captain Dean Couzins missed a penalty stroke to make the semis after beating Argentina in sudden death on penalties after their match ended 1-1.