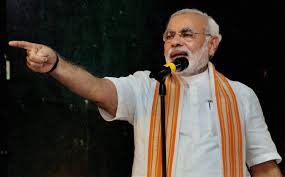 AHMEDABAD : Chief Minister Narendra Modi, in a letter written to Prime Minister Manmohan Singh on Wednesday, sought his intervention and action against Union Home Minister Sushilkumar Shinde’s advisory on releasing minority youth detained wrongfully. Calling Shinde’s remarks as “brazen attempt to woo the minority community’’ , Modi said it marked a “new low” for the country. He added that the principles at stake were far too valuable to be sacrificed at the altar of “political expediency”.
Condemning the Home Minister’s suggestion of setting up review or screening committees to assess the role of minority youths languishing in jails on terror charges without trial, Modi urged the PM to advise Shinde not to direct his attention to only minorities. He added that Shinde’s suggestion was against constitutional principles and the “right to equality before the law”.
He said, “A crime is a crime irrespective of the birth marks of the criminal. His religious beliefs could not determine the guilt or innocence.”
Modi added that the proposed directive of setting up review committees was against the provision of criminal law, which does not provide for any review committee for withdrawal of pending cases where chargesheets have been filed. “One cannot rule out the possibility of trials getting delayed due to such illegal action on the part of the state if courts were to find faults with such interventions made on extraneous considerations. If this were to happen, undertrial prisoners will end up being under incarceration for longer periods, thus achieving exactly the opposite of the purported objective,” wrote Modi.
Suggesting that Shinde should find a solution within the constitutional framework, Modi mentioned that an acceptable solution would be to fast-track all terror cases. He said that this would have the benefit of convicting and punishing the real perpetrators of terrorism while acquitting the innocent people within a time frame. Modi added that this approach would strengthen our fight against terror and take care of genuine cases of wrongful arrests, while also ensuring “justice to all, appeasement to none”.
Arguing that Shinde should focus on the National Investigation Agency (NIA), Modi said, “It would be interesting to know how many innocent youths are found to be wrongly implicated in NIA cases. I hope the Home Minister understands that every case of acquittal need not be a case of wrongful arrest and false/mala fide implication.”

Modi said that Shinde’s public statement, without the backing of reliable data, was highly undesirable. Quoting Article 44 of the Constitution, Modi said that we had not made much headway in having a common civil code. Article 44 says, “The state shall endeavour to secure for the citizens a Uniform Civil Code throughout the territory of India”. However, Modi praised the existing common criminal procedure code that did not take into account the faith or religion of an accused.
Not born to flee from taking decisions: CM
Positioning himself as a “decision-maker” and a ‘trustworthy” person before a group of eminent industrialists gathered in the state capital, CM Narendra Modi on Wednesday said he is “not born to flee” from decisions.
Addressing the national executive committee meeting of the Federation of Indian Chambers of Commerce and Industry (FICCI), Modi said, “Responsibilities have to be taken, irrespective of them being good or bad. Today it has become a fashion to flee.
People ask me, Modiji why did not you flee from the Patna rally (when the bombs went off). I tell them, if I had to flee, Modi would have never been born.”
“No big vision is needed… but somebody has to take responsibility. It should not happen that you are ready to wear garlands, but flee when shoes (read criticisms) are hurled. This is the reason for the pessimism prevailing in the country today,” he said. “There was a lot of joy, happiness and expectations among the common man at the beginning of the 21st century. But that period did not inspire us. Had we decide on a course of action, a strategy, an implementation plan, proper work allocation, resources identification, then we would have set a solid foundation for the 21st century. We lost that chance,” Modi said.
Stating that concrete steps needed to be taken to make the “nation trust and believe”, Modi said, “An atmosphere of trust and confidence is needed to be created across the country at the moment. People trust they can come to Gujarat to work and to do business. This trust can overturn many a situation. And so, I say, leadership matters a lot,” he said.
Listing three key sectors for sustained growth of the country’s economy — agriculture, manufacturing and services — Modi said the trust that lies broken between the business houses and the government needs to be re-built.