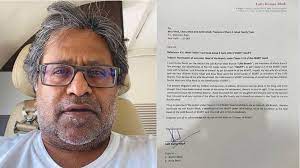 NEW DELHI : Former IPL Chairman and member of the Modi family trust, Lalit Modi, today announced his son, Ruchir Modi as the successor of the Lalit Kumar Modi (LKM) Branch of the KK Modi Family Trust (KKMFT). In a Twitter post, Mr Modi shared a letter and said, “In the light of what I’ve gone through, it’s time to retire and move on and groom my kids. I am handling them all.”
In the letter, Mr Modi added that the members of the LKM Branch are the beneficiaries of the KK Modi Family Trust, and after the death of his wife, Minal Modi, his two children, Ruchir and Aliya are the beneficiaries. Mr Modi said the decision to nominate his son, Ruchir, was taken after discussions with his daughter and considering his legal dispute with his mother and sister for the past several years. On his legal dispute, the former IPL Chairman said, “It is tedious, strenuous and has gone for long and even though there have been several rounds of discussion for settlement, there is no end in sight. It has caused and continues to cause me immense distress.” Last year, he informed the Supreme Court that the top-court-mandated mediation to revolve his long pending property dispute failed.
Mr Modi recently shared an update on health and said, “After three weeks in confinement with a double covid in two weeks, accompanied by influenza and deep pneumonia…Unfortunately, still on 27/7 external oxygen.” Controversial cricket administrator and former IPL chairman Lalit Modi on Sunday announced that his son Ruchir Modi would succeed him as head of Lalit Kumar Modi (LKM) branch of the K.K. Modi Family Trust.

He also announced his resignation as head of LKM branch and beneficiary of the K.K. Modi Family Trust. Modi in a letter to members of the K.K. Modi Family Trust, namely Bina Modi, Charu Modi and Samir Modi, said that the ongoing litigation between him and his mother and sister have been going on for too long and caused a lot of distress to him, despite several rounds of negotiations for settlement. Thus he has decided to name his son, Ruchir as his successor of the LKM branch, who would handle all its affairs.
Lalit Modi said in the letter that he took the decision to name his son as his successor after discussions with his daughter Aliya Modi.In a separate letter, he also announced his resignation as the head of LKM branch and beneficiary of K.K. Modi Family Trust.The move by the businessman has come after he was recently hospitalised and placed on oxygen support after suffering from Covid-19. “In light of what I have gone thru, it’s time to retire and move on. And groom my kids. I am handing them all,” Modi tweeted later.
(Bureau Report with Media Inputs).