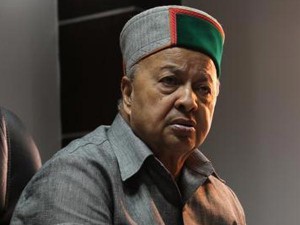 NEW DELHI: The Delhi High Court on Wednesday refused to grant any interim protection to Himachal Pradesh Chief Minister Virbhadra Singh’s two children, who have challenged the Enforcement Directorate’s provisional attachment of some of their assets in a money laundering case.
“We will give them (ED, Ministry of Finance) an opportunity to file response and then we will see if there is a need to protect you, if any. We don’t see any urgency to pass any interim order now,” a bench of Chief Justice G Rohini and Justice Jayant Nath said.The bench, meanwhile, issued notices to the ED and Centre on the plea filed by Virbhadra’s daughter Aprajita Kumari and son Vikramaditya Singh, who have also sought stay on the March 23 provisional attachment order (PAO) of ED, saying it has “exceeded its jurisdiction”.

During the hearing, senior advocate Amit Sibal, who appeared for the petitioners, requested the court to stay the further proceedings in the matter but the bench said that it will go through the response filed by the Centre and will then hear the matter.
When the bench posted the matter for April 18, Sibal said, “Before April 18 I must be protected. The ED may commence proceedings within a period of 30 days from the provisional attachment order of March 23.”
To this, the bench said, “You are challenging the constitutional validity. They (ED and Centre) will be given an opportunity to file their response.”
The petitioners have also challenged the recently amended second proviso of section 5(1) of the Prevention of Money Laundering Act (PMLA), saying it be declared unconstitutional, claiming it was contradictory to the scheme of the Act and violated the Constitution.
The second provison of section 5(1) of PMLA provides that any property of a person may be attached if ED’s officer concerned has reasons to believe, on the basis of material in his possession, that if such property allegedly involved in money-laundering is not attached immediately, it is likely to frustrate any proceeding under the Act.
During the hearing, Sibal said that the petitioners were not named as accused in the ED’s ECIR filed in the case.
He said Virbhadra has given a statement before the ED but the provisional attachment order was passed in which fixed deposit receipts (FDRs) and papers of policies of the petitioners have been attached.Sibal also contended that the March 23 order was passed but no scheduled offence has been alleged against petitioners.“There is no charge sheet against the petitioners or Virbhadra Singh for any scheduled offence,” he said.
The bench, however, said, “in the meantime, let attachment continue and they (ED and Centre) will file their response.”“The attachment order is of March 23. It is not even a month,” the bench said after Sibal referred to previous orders passed by the high court in such matters.

Sibal urged the bench to stay further proceedings in the case saying, “I have challenged the vires of second proviso. The attachment is illegal. It is a stigma for me if the attachment is continued.”The bench told Sibal that if any notice is issued to them before the next date of hearing, they can approach the court.
The two children of the CM had yesterday moved the high court seeking quashing of a provisional order of ED to attach some of their assets under the PMLA.
ED has provisionally attached assets worth Rs 15,85,639 belonging to Aprajita and Rs 62,86,747 of Vikramaditya, their joint petition said and added that this order was passed without them being named in the Enforcement Case Information Report (ECIR) of October 27, 2015 lodged against Virbhadra and others under PMLA.
The plea said that the basis of passing PAO under PMLA are the Income Tax department’s inquiries and investigation “which itself are under challenge and are not conclusive of any allegation” made against them.
“Any finding on the basis of inconclusive proceedings is per se bad and unsustainable in law. Action taken by respondents (ED and Centre) are motivated due to extraneous reasons and are presumptive, malafide and arbitrary,” their petition said.

The plea challenged the PAO saying “respondents have exceeded their jurisdiction by abusing the process of law and powers conferred to them by the statute passed by PAO dated March 23, 2016, attaching the properties of the petitioners”.

It also contended that their property could not be attached without giving them opportunity to explain sources of property under attachment and that PAO was also bad in law as the property was not bought from proceeds of crime.