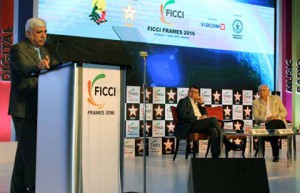 NEW DELHI: While speaking during the first session on the last day at FICCI Frames 2016, the Information & Broadcasting Secretary, Sunil Arora, clearly stated how the ministry was moving towards making India a hub of media and entertainment industry in the world.
“One of our primary objectives is to bring down the number of visitors to Shastri Bhavan to a trickle and to move towards less regulation and facilitate India to become the hub of media and entertainment industry,” Arora said. He was participating in a dialogue with Uday Shankar, CEO, Star India and veteran filmmaker Ramesh Sippy.
He mentioned that I&B Ministry was also guided by the ‘minimum government, maximum governance’ philosophy and remained committed to promoting ease of doing business in the media and entertainment sector.
Arora said clearance for new TV channels had been expedited over the last six months under a liberalised regime. He said the Ministry of Home Affairs has agreed to most of the suggestions made by the I&B Ministry about liberalising several conditions.
Arora said the government and ministry was completely committed to digitisation programme, but expressed concern over the less than 10 per cent share of Indian-made set-top boxes. “We want the industry to look at this opportunity under the Make in India initiative and produce more STBs in India under the Electronics Manufacturing Scheme.”

Arora stressed that the ministry intends to play a role of a facilitator for the media and entertainment industry to flourish in the country.
He informed the audience that a decision had been taken to set up the National Centre of Excellence in Animation, Gaming and Visual Effects in Mumbai. Maharashtra Government is providing a 25-acre land near Film City in Goregaon for the institute.
The I&B Secretary also said the government had approved the Rs 598-crore National Film Heritage Mission to preserve and promote India’s rich film and cultural heritage.

He also said a National Museum of Indian Cinema is coming up in Films Division Complex on Pedder Road with several interactive exhibits. “Prime Minister has taken a keen interest in this museum which is being curated by the National Council of Science Museums, Kolkata,” he added.

Focusing on ease of doing business, Arora informed that a Film Facilitation Office has opened in the National Film Development Corporation, NFDC to function as a single window service for film related clearances.  The Secretary said an award has been instituted as part of the National Film Awards, to honour the states that are most film friendly.  In 2016, Gujarat has been adjudged the most film friendly state, followed by UP and Kerala.

Participating in the discussion, Uday Shankar, who is also the Chairman of the FICCI Entertainment Panel expressed concerns over the viability of stand alone news channels. He also said entry of fringe elements in the news broadcasting field for ‘ancillary facilities’ was affecting credibility. Ramesh Sippy expressed concern over low theatre density in India.