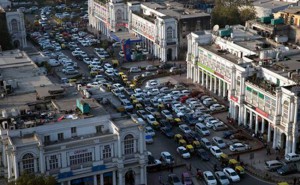 NEW DELHI: The fact that there are so many exemptions means enforcing the Delhi government’s odd-even scheme meant to cut down on vehicular pollution from January 1 will be difficult, Delhi Police Chief BS Bassi said today.
In an interview to ab TV Channel  the Delhi Police Commissioner, Mr Bassi said, “What if someone says he is sick. I cannot stop him because I have to believe him. There is a possibility that many persons who will be violating will be able to wiggle through because of the exemptions. I wish we had gone for a policy without any exemptions.”
Refusing to be drawn into remarks by Aam Aadmi Party leaders that he seemed to be acting like a spokesperson of the central government – which is in a pitched battle with the Delhi government – Mr Bassi made it clear that vigilantism by AAP volunteers would not be tolerated.
According to Mr Bassi, his police force would not accept AAP volunteers, ten thousand of whom are meant to patrol the streets, stop moving vehicles which may be in violation of the odd-even scheme.Cars and autorickshaws move through the central Connaught Place area in New Delhi, India, Thursday, Dec. 24, 2015. (AP photo)
According to Mr Bassi, legal action could be taken against such offenders.”We will not allow any unlawful activities. No private citizens will be allowed to infringe on the laws by telling people (violating the law) to stop or go home,” he said.
Neither would the police allow Resident Welfare Associations from taking the law into their own hands by asking violators to return home with their cars, he said.Reacting to reports that fake number plates were already being procured by those who wanted to ensure they could use their cars every day, Mr Bassi said it would be premature for the police to clamp down on offenders.
“Preparation (to commit a crime) is not an offence under Indian penal laws,” he said.
Cars and buses clogs a road in New Delhi, India, Wednesday, Dec. 16, 2015. (AP photo)The Delhi government plans to try out a plan to allow cars with odd and even license plates on alternate days between January 1 and 15 in an effort to curb vehicular pollution.

Confirming that the Delhi Police had not been officially informed of the Delhi government’s plans to carry out a full-fledged trial run of the odd-even scheme on Wednesday, Mr Bassi said, “I don’t need to be informed. As far as we are concerned we can respond even in an emergency situation. We will part of the trial run.”
As far as enforcement is concerned, the Police Commissioner made it clear that the battle to clean up pollution in the national capital was a priority which is why special squads were being formed as part of a comprehensive Delhi Police drive to clamp down on those who choose to defy the notification and use their vehicles.