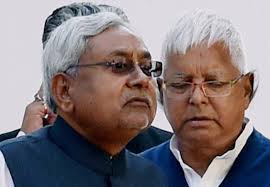 PATNA: Weeks after their victory hug in Bihar, the bonhomie seems to have soured between rivals-turned-allies Nitish Kumar and Lalu Yadav.
The recent killings of three engineers has led to a war of words that contrasts sharply with the unity the two leaders projected during the November poll campaign, against the BJP’s charges of “jungle raj” or lawlessness in Bihar.
On Tuesday, Lalu Yadav said that the Nitish Kumar government must be “more vigilant” on law and order. “If anyone receives any extortion call then please call me and I will ensure speedy action,” said the Rashtriya Janata Dal chief.
A senior leader of his party, Raghubansh Prasad Singh, yesterday went further and said “Nitish Kumar, who is sitting on the driver’s seat of the government, should initiate stern measures to check the further slide.”
Nitish Kumar has been silent till now but his party has reacted sharply.”Nitish Kumar does not need any lecture from anyone. His track record is known,” said Janata Dal United spokesperson Sanjay Kumar Singh.
Exactly a year ago, Nitish Kumar and Lalu Yadav’s joint appearance at a rally signaled their reunion after 20 years of bitter political enmity. The two leaders set aside deep differences to take on a common enemy, the BJP, in the assembly polls.
After their sensational victory, Lalu Yadav stayed out of the government but his two sons Tejaswi and Tej Pratap, both debutants, took two of the most important spots in the Nitish Kumar cabinet.
The coalition faces its biggest challenge after the murder of the engineers and a businessman recently. The BJP has held up the incidents as an example of the return of “jungle raj”.
A senior Janata Dal United leader, Shyam Rajak, said it was Nitish Kumar who had pulled Bihar out of perceived lawlessness. The period from 1990 to 2005, when Lalu Yadav’s party was in power, is often described by the opposition as the most lawless period in the state in recent times.