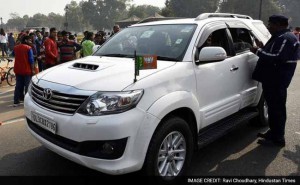 NEW DELHI: Delhi began its New Year with drastic new measures to cut smog in the world’s most polluted capital.  Only cars will odd-numbered license plates are allowed on the road today – but a BJP parliamentarian Satyapal Singh, who represents Uttar Pradesh in the Lok Sabha, was caught breaking that rule at India Gate in the heart of the city.
Mr Singh was the police commissioner of Mumbai.
From today, only cars with odd-numbered licence plates can be used on odd-numbered dates and those with even-numbered plates on the other days to try to reduce pollutant levels which regularly hit 10 times the World Health Organization safe limits.
As the restrictions, which will run till January 15,  came into force on Friday morning, pollutant levels hit a “hazardous” 429 on the US embassy’s air quality index, meaning everyone is at risk of respiratory problems and children and older people should stay indoors.
The BJP, which leads the union government, has slammed the experiment as poorly conceived,  partly because of inadequate public transport arrangements.  Hundreds of traffic police and volunteers took to the streets to enforce the scheme, including dozens of children wearing smog masks and holding banners urging drivers to comply.
“Delhi has done it!” tweeted the city’s Chief Minister Arvind Kejriwal, who carpooled with two ministers to get to work.”Reports so far v encouraging (sic),” he added. However, because it is New Year’s day, most people aren’t working; schools are also closed for the duration of the two-week experiment.
Critics say the restrictions do not go far enough, with motorcyclists and women driving alone exempt. Campaigners say motorbikes create up to 31 per cent of pollution from vehicles.
A 2014 WHO survey of more than 1,600 cities ranked Delhi as the most polluted, partly because of the 8.5 million vehicles on its roads.