NEW DELHI : Under fire for receiving special favours from the Modi government in Gujarat, specifically for being sold land on the cheap for his massive port-cum-SEZ in Mundra along the Gujarat coast, businessman Gautam Adani said in an interview to NDTV that the land that was allotted was barren and so there was no question of it being sold at lower rates.
But the Gujarat government’s own documents, accessed by website Truth of Gujarat, suggest that the Adani Group may have got land below the market rates. In a written reply to a question raised in the Gujarat assembly in 2012, the state’s revenue minister Anandiben Patel said that until December 2011, the state government sold 14,305 acres of land in Mundra to the Adani Group. 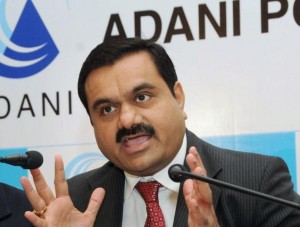 The reply said that the land was sold from Rs. 1 per to Rs. 32 per square metre. In his speeches, Rahul Gandhi says Gujarat is following a ‘toffee model’ of growth, of selling land to industrialists at Rs. 1, the price of a toffee. Mr Adani says these low rates pertain to an earlier period, before Mr Modi came to power. However a PIL filed in the Gujarat High Court lists the chronology of land purchases made by the Adani Group which shows that the Group continued to buy land till 2007, much after Mr Modi became chief minister (in 2002). Further, the Gujarat government has submitted details of the circle rate of industrial land in Mundra between 2007-2008, which average out to Rs. 92 per square metre, three times higher than the highest price paid by Mr Adani.
In some cases the circle rate is as high as Rs. 520 per square metre.
Mr Adani did not respond to the specifics, saying that those who know Kutch, the region where the Mundra project is located, would understand that the rates at which he was sold the land were not low.