NEW DELHI : As the Congress grapples with predictions of its worst-ever election defeat, the party has one piece of good news – Priyanka Gandhi, the sister of  party vice-president Rahul Gandhi, has stepped up to lead a fightback by the political dynasty.Priyanka, 42, has traditionally ceded the limelight to her older brother Rahul, 43, usually described as the diffident scion of the country’s most famous political family. Their mother, Sonia, is Congress president. 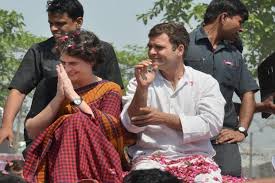 But in the last lap of this election, Priyanka has emerged swinging against Narendra Modi, the BJP’s prime ministerial candidate, who is expected to deliver his party’s strongest performance ever. Priyanka – whose resemblance to her famous grandmother and four-time premier Indira Gandhi is often commented upon – has called the battle against Mr Modi and the BJP a “fight for the heart” of a secular India.
“The ideology of Congress is to unite people… while that of the opposition is to divide,” she said recently, repeating her party’s line that the BJP promotes communalism for political gain and will threaten social peace if elected.
Priyanka’s direct confrontation with Mr Modi comes after his repeated allegations that her husband, Robert Vadra, made a vast fortune through illicit land deals that were permitted to him in states like Haryana where the Congress is in power. Mr Modi and the BJP say Sonia and Rahul Gandhi served as enablers for Mr Vadra’s business interests.
Priyanka’s new place at the heart of the Congress campaign has also raised questions about whether she is eclipsing her brother, who is the Congress frontman for the election. The BJP says her star turn proves that her mother and brother have failed to deliver an effective campaign.
While Priyanka, a mother of two children, has replaced her brother Rahul in the headlines with her attacks on Mr Modi, analysts say her appearance has come too late to rescue the party from a humiliating rout. The financial dealings of her husband have given the BJP a new opportunity to hammer away at its anti-corruption message after the Congress-led coalition’s two scandal-plagued terms in office. In a video released over the weekend, titled “Damaad Shree” (the son-in-law), the BJP demanded an explanation for how Mr Vadra has configured a real estate portfolio worth crores over the past five years. The video showed a well-dressed Mr Vadra working out, contrasting that with poor farmers whose land he bought. Mr Vadra has never faced any legal charges.
“The effective problem with Priyanka is her last name (Vadra) and the extent to which her appeal may have been compromised by the Vadra connection,” Subhash Agrawal, founder of think tank India Focus, told news agency AFP. “Priyanka clearly has got the BJP a little shaken up and the campaign no longer looks like such a walkover, but she’s been brought out too late,” he added.
Rahul and his sister are extremely close after a childhood scarred by the political assassinations of their grandmother, and their father, former prime minister Rajiv Gandhi. While Priyanka has a natural connect with voters, Rahul, who has called power “a poison”, is often shy and awkward.
“Priyanka has spontaneity and an ability to deliver a punch that crowds like – Rahul is more subdued,” Gandhi family biographer Rasheed Kidwai told AFP.
A leaked US diplomatic memo in 2007 said Rahul was “widely viewed as an empty suit”. Many in the Congress have long hoped Priyanka will take a greater political role but for now, she has said she will only campaign in the constituencies of her mother and her brother in Uttar Pradesh.”We must respect her decision,” said Congress party spokesman Shakeel Ahmed.