NEW DELHI: The BJP vs Congress war over Robert Vadra’s land deals shows no signs of abating with the saffron party asserting that the Rajasthan government will begin its probe into the controversial deals next month and questioning the “silence” of party chief Sonia Gandhi and vice-president Rahul Gandhi on the transactions. BJP declared Vadra’s deals will be investigated in Rajasthan, where CM Vasundhara Raje will ensure a thorough probe once the Lok Sabha polls end on May 16. BJP said the silence of Congress’s top duo only added to suspicions that the “family” had something to hide on the land deals, BJP spokesperson Nirmala Sitharaman said. 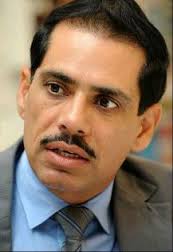 Former BJP chief Nitin Gadkari also chipped in from Lucknow where he was campaigning for Rajnath Singh, saying the UPA government should either set up a judicial probe into Vadra’s dealings or Sonia should file a defamation suit if the allegations against her son-in-law are baseless.
Sitharaman added, “It is not an issue of vendetta politics. It is more an issue of an electoral promise given by Raje that she will definitely look into all the malpractices of the Gehlot government and Vadra is one of these … once the model code is lifted … law will take its due course.”Congress retaliated by dismissing BJP’s threats, saying the saffron party had got “nervous” because of Priyanka Gandhi’s effective campaign.
“It is very clear BJP is panicking due to Priyanka Gandhi’s campaign in Rae Bareli and Amethi. Her campaign is resonating across the country,” party spokesman Randeep Surjewala said, describing the information in a CD and booklet released by BJP as “trash allegations made by an elementary school kid”. But BJP is showing no signs of easing its attacks on Vadra. “Till date, we don’t have the Congress chief talking about it nor has the vice-president, who had said he will bring in great reformatory changes in the party,” Sitharaman said.
BJP also termed Congress’s claim of the Supreme Court giving Vadra a clean chit an “incorrect interpretation”. With the two parties sparring over the issue, AAP accused both of “selective shadow-boxing”, saying they were driving away the focus of the campaign from real issues. In a statement, the party said it had already highlighted the issue of Vadra’s dealings 18 months ago.