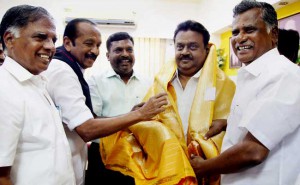 Reacting to the charge, DMK treasurer MK Stalin said the party would take appropriate legal action in the matter.”In the first place no talks were held (between DMK and DMDK). How come such a thing could have happened when parleys did not take place,” he said.

“Premalatha has replied to this allegation. Still, since Vaiko has levelled a blatantly denigrative charge against the DMK. Our party chief Kalaignar (Karunanidhi) would, for sure, take appropriate legal action. Wait and see,” Mr Stalin told reporters in reply to questions on the issue.DMDK leader and Vijayakanth’s wife Premalatha refused to be drawn into the controversy.
“It is his (Vaiko) opinion. Anything (questions) related to this should be posed to him, we are committed to unseating the AIADMK regime,” she told reporters in Tuticorin.The first election meeting of the PWF will be held in Chennai on April 20.
Mr Vaiko said quality education would be provided free of cost, and liquor would be abolished. Besides, the party would write off farm loan and put an end to unemployment problem, he said.