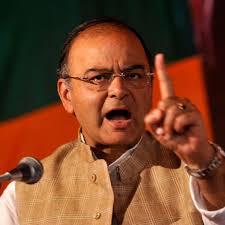 NEW DELHI: Finance Minister Arun Jaitley on Tuesday told a Delhi court that he had not received any money from anybody during his tenure as DDCA President and charged Chief Minister Arvind Kejriwal with deflecting attention from CBI probe “against a particular person” working with him.
Jaitley alleged that Kejriwal and five other AAP leaders – Kumar Vishwas, Ashutosh, Sanjay Singh, Raghav Chadha and Deepak Bajpai – had falsely stated that as the then DDCA President, he had siphoned off the money and was the beneficiary.
The Finance Minister, who appeared amid tight security before Chief Metropolitan Magistrate Sanjay Khanagwal to record his statement supporting the criminal defamation complaint filed by him against Kejriwal and others, said they had given false and defamatory statements against him and his family members.

He said that Kejriwal’s statement that he had received money when the Feroz Shah Kotla stadium was constructed during his tenure as the DDCA Chief, was false, as the Board of Directors had constituted a committee to supervise the work and he was not a member of this supervisory committee.
Besides Jaitley, the court also recorded the statement of senior journalist Rajat Sharma, who appeared as a complainant witness in the case.During recording of his statement which lasted for about 70 minutes, Jaitley referred to Twitter and Facebook posts of the six persons and said their statements had damaged his reputation even after he had filed the defamation complaint.

He alleged that these AAP leaders had made false and defamatory statements against him and his family members which lowered his dignity in the eyes of the public at large.
“Their acts attracted adverse public comments and made my reputation discriminatory in the public at large,” Jaitley said, as the recording of his statement concluded today.