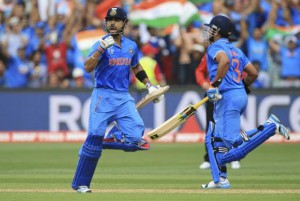 NEW DELHI : Public broadcaster Doordarshan (DD) can continue to share live feed of cricket World Cup matches with private cable operators as the Supreme Court on Friday granted a stay on the Delhi High Court order in this regard.
The High Court had allowed the plea of Star India Ltd, which holds the exclusive telecast rights of the Cricket world cup, and had asked Prasar Bharati not to share the live feed of the matches with private cable operators.
A bench headed by Justice Ranjan Gogoi said that its order staying the operation of the high court verdict will continue till it finally decides the petition of public broadcaster Prasar Bharati.
On Thursday, Prasar Bharati had told the apex court that it was not feasible to start a separate channel for showing the cricket world cup matches.
Prior to that, the apex court had sought the response of the public broadcaster on various suggestions mooted by Star India Ltd in this regard. The suggestions included opening of a new DD channel for showing the cricket matches.
Attorney General Mukul Rohatgi, appearing for the Centre and Prasar Bharati, had told the court that it was mandatory for a private channel under the Sports Act and the Cable TV Network Act to share the feeds of matches of “national importance” with Prasar Bharati for providing it on DD’s free-to-air terrestrial channels.
Earlier, the apex court had stayed the Delhi High Court judgement barring Prasar Bharati from sharing with cable operators the live feed of the 2015 Cricket World Cup, while asking Star India, BCCI and Prasar Bharati to come out with their proposals to resolve the dispute.
“The position of 2007, we are maintaining it for a while.We thought there is something to hear. We will not bring about a situation abruptly. This arrangement under which DD shows free feed has been there for the last seven years. Let it continue,” the bench had said while staying the HC verdict.
Prasar Bharati had moved the Supreme Court challenging the February 4 Delhi High Court judgement which was passed on the plea of Board of Control for Cricket in India (BCCI), ESPN and Star. They had contended that cable operators were getting live feed free through DD channels, resulting in loss of revenue for them.