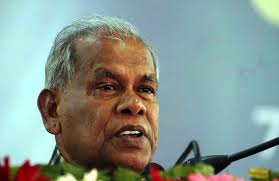 PATNA: Bihar Chief Minister Jitan Ram Manjhi resigned on Friday ahead of a trust vote in the State Assembly. The resignation was announced by Principal Secretary to Bihar Governor Brajesh Mehrotra, after Mr. Manjhi paid a visit to the Raj Bhawan before the start of a joint session of the Bihar Legislature.
Earlier, JD(U) chief whip Sharawan Kumar had said that legislators of the JD(U), the RJD, the Congress and the CPI an independent supporting Nitish Kumar would boycott the Governor’s address to the Assembly and would enter the Assembly only during the trust vote.
Governor Keshari Nath Tripathi was scheduled to reach the State assembly at 11 a.m. to address the joint session of the State legislature following which Mr. Manjhi was to give his budget speech.The crucial floor test on Friday came amid claims of majority by both the Manjhi and Nitis Kumar camps.
After several rounds of dinner diplomacy, luncheon party and high tea thrown largely by Mr. Kumar’s camp on Thursday, speculations were rife that Mr. Manjhi will fall short of support.
As things stood on Thursday night, Mr. Manjhi had the backing of eight MLAs — four others have been disallowed by the Patna High Court — and of 87 BJP MLAs. On the other side, Mr. Kumar had the backing of 128 MLAs.
There was buzz on Thursday itself that Mr. Manjhi may not go for the floor test and that he would step down from his post after giving an emotional speech about the development works his government has done for the welfare of the poor and Mahadalit section of the society during his short tenure.
His predecessor, Mr. Kumar, who apparently pulled all strings to replace Mr. Manjhi again from his post, too had opted for a similar move in March 2000 when he fell short of majority for the trust vote of his government. He had given an emotional speech on the floor of the house and then moved straight to Raj Bhawan to resign.
It is also said that whatever political score Mr. Manjhi has to set, he already has set it by emerging as a Mahadalit leader of Bihar’s political spectrum and now has nothing to loose.