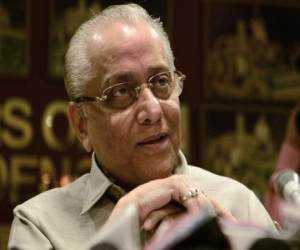 CHENNAI: After a gap of over ten years, seasoned cricket administrator Jagmohan Dalmiya was on Monday unanimously elected as BCCI president at the Annual General Meeting in Chennai.
While Himachal Pradesh Cricket Association chief Anurag Thakur was elected as BCCI secretary, C.K. Khanna became the vice president.T.C. Matthews has been elected as the BCCI vice-president, while Jharkhand State Cricket Association chief Amitabha Chodhary and Haryana’s Anirudh Choudhary were elected as Joint Secretary and Treasurer respectively.
Earlier, Dalmiya had temporarily run the affairs at the BCCI in 2013 when Srinivasan stepped aside following the IPL spot-fixing and betting scandal.
The former International Cricket Council (ICC) president, whose previous tenure as full-time Board of Control for Cricket in India (BCCI) chief ended in 2004, emerged as a consensus candidate of the two rival factions — as the deadline for filing nomination ended on Sunday afternoon.
While one faction is led by the sidelined board president N. Srinivasan, the other camp is led by Maharashtra strongman Sharad Pawar.Both the factions claimed that Dalmiya was their candidate, but the wily 74-year-old businessman has kept his cards close to his chest.
“Three sets of nominations were filed on Dalmiya’s behalf. According to sources Each of the six BCCI affiliates from the east Zone were either proposer or seconder,” As per BCCI rules, it is the turn of the east zone associations thisyear to nominate candidates for the elections.
Srinivasan was barred by the Supreme Court from contesting the election following the Indian Premier League (IPL) spot fixing scam. He is not even allowed to participate in the AGM, but can only vote when required as a nominee of the Tamil Nadu Cricket Association (TNCA) if there is an election.
Former ICC chief Pawar, who was BCCI president from 2005-2008, was also eyeing the post, but had to backtrack after failing to find a proposer and seconder from the east zone.
Earlier in the day, a Pawar loyalist claimed that the former union minister had “backed Dalmiya”. However, knowledgeable sources maintained till late Saturday night that the Pawar lobby had tried to persuade Dalmiya to settle for the post of BCCI patron-in-chief, and accept the ace politician as president.
But sensing that the dice was heavily loaded in his favour, Dalmiya stonewalled the efforts.There would be contest for all the other slots – secretary, joint secretary and treasurer. But which way the two Kolkata-headquartered BCCI affiliates — Dalmiya’s Cricket Association of Bengal (CAB) and the National Cricket club of India — would go still remains wrapped in mystery.
The Srinivasan camp has nominated Sanjay Patel, Anirudh Chaudhry and Amitabh Chaudhary for the posts of secretary, treasurer and joint secretary, respectively.
The Pawar lobby’s candidate for secretary is Anurag Thakur, while the group is backing Rajiv Shukla as treasurer and Chetan Desai as joint secretary.
Dalmiya became BCCI treasurer in 1983 – the year India won the World Cup – and later served as its secretary, before becoming ICC chief for three years since 1997.He took over as BCCI president in 2001 and continued to be the all-in-all in the board till his tenure ended in 2004.
Dalmiya then controlled the board by proxy for a year, with then president Ranbir Singh Mahendra being a mere puppet.But in 2005, Pawar registered an emphatic victory to become BCCI chief while his team won all the other key posts, as the Dalmiya camp suffered an embarrassing defeat.
Months later, the BCCI lodged a police complaint against Dalmiya for alleged misappropriation of funds related to the 1996 World Cup in which India was a co-host.
As Damiya faced a police probe, the BCCI expelled him in December 2006 which also forced him to step down as CAB president.In mid-2007, Dalmiya was exonerated by the court, and he returned to head the CAB in 2008, by defeating then president Prasun Mukherjee. However, in the next few years Dalmiya seemed only a shadow of his former self, shorn of his influence in the board.
In June, 2013, Dalmiya was appointed BCCI’s interim president after Srinivasan stepped aside till the probe on Srinivasan’s son-in-law Gurunath Meiyappan’s alleged involvement in the IPL spot-fixing scandal was completed. Srinivasan returned to the saddle in October 2013.