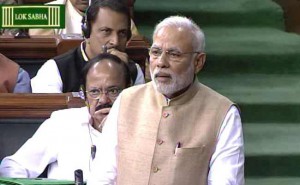 NEW DELHI :Prime Minister Narendra Modi today had lunch in Parliament and ran up a princely 29-rupee bill, which was reportedly paid by one of his ministers.
Chhedi Paswan, a BJP MP from Bihar, and Mansukhbhai Vasava, a member from Gujarat, were settling down for their usual lunch at the members’ canteen, when in walked PM Narendra Modi. He headed straight for their table and sat down.
The MP canteen is not a place where prime ministers are seen often – or ever.”So how are things in Bihar?” the PM asked Chhedi Paswan, who fumbled for an answer.
Mr Modi then turned towards the surprised canteen staff and said, “Kuchh khana khila doh (please give me some food).”Knowing that the prime minister is a vegetarian, an employee offered a vegetarian thali or platter, featuring Saag, salad, dal and curry. The PM nodded.
The prime minister took around 20 minutes to finish his meal, all the while chatting with the Gujarat MP.When it was time to pay, the canteen staff hesitated to charge the prime minister, who insisted on paying.
Chhedi Paswan, who perhaps had the most nervous meal of his life, said:  “The energy and coal minister (Piyush Goyal) was around and he picked up the tab. The thali costs RS 29-30. He paid.”
PM Modi left after thanking the staff and signing the visitors’ diary, in which he called the canteen staff “Annadata (God who provides meals).”
The Parliament canteen is among the cheapest eateries in the country; lawmakers and even journalists can have a hearty meal for an eye-popping Rs. 12. The costliest dish is a plate of chicken biryani, which costs Rs. 34.
The canteen was milling with activity when PM Modi causally walked in to eat lunch at 1 pm. The canteen, run by Indian Railways, operates from Room number 70 on the first floor of the Parliament building.
“Anything special, sir,” canteen in-charge BL Purohit asked the Prime Minister.The PM responded by saying that he will eat whatever has been prepared for lunch and that there was no need to make special arrangements for him. “Jo hai wahi khilaiye…kuchh bhi. alag se intejam karne ki jarurat nahi hai,” he said.
Modi first asked for some water and then ate some fruit salad.The canteen staff later served him veg thali (vegetarian platter) consisting of sarson ka saag, aloo subji, rajma, rice, roti and curd. The total bill for the food was Rs 29, PM Modi gave Rs 100. The staff returned Rs 71 as change.
In total, there were around 25-30 MPs present in the canteen at that time; the PM mingled with them and chatted with them. He was there for over 25 minutes.
Realising that it was a “historic” occasion, Purohit requested the Prime Minister to write in a ‘Suggestion Book’ which he presented to him. Modi wrote: “ann data sukhi bhava” and signed it. It was probably the first time any Prime Minister had lunch in the canteen as a customer.
Rajiv Gandhi had once eaten in the canteen but not as Prime Minister, reports said.