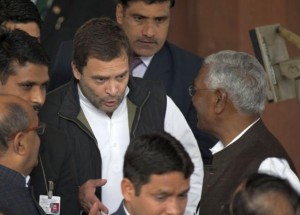 NEW DELHI: Sparks flew in the Lok Sabha on Wednesday as the raging Jawaharlal Nehru University row and suicide of Dalit student Rohith Vemula was taken up for discussion, with opposition accusing the government of muzzling the voice of the youth and “mercilessly crushing” the principles of democracy.
To counter the opposition onslaught, the BJP targeted Congress vice-president Rahul Gandhi for his “support” to those standing with hanged Parliament attack convict Afzal Guru and said the House has to decide if it stands with those who attacked Parliament or those who laid down their lives defending it.
The debate, on the first working day of Budget session, saw accusations and counter-accusations, with both ruling and opposition sides underlining their credentials as “nationalists”.

“Bandaru Dattaterya in his letter had called Rohith a castiest and an anti-national. Where in the world can you see a HRD minister writing five letters in any case,” he said.Mr. Scindia also raised the issue of FTII, IIT Madras and JNU and said, “the government was trying to muzzle the voice of the youth.”
Minister Sushma Swaraj, Tribal Affairs Minister Jual Oram and Irani for emphasising that Vemula was not a Dalit.Criticising the role of Hyderabad University administration, he said protests and fights are the part of academic institutions but in this case the Vice-Chancellor should have tackled this issue in a better way.

However, he instead suspended the Dalit students and compelled them to stay in an open tent because of the “politics of the RSS and BJP,” Mr. Scindia said.
“What is the duty of the government? It is to protect the democratic institutions and work for the betterment of the people. But since last two years, with the atmosphere of intolerance, no one feels secured. It is mercilessly crushing the democratic principles,” the Congress leader said.
“The Prime Minister speaks of demographic dividend of the youth. But what do we see in the country?, we see Vyapam in Madhya Pradesh, the problem of drugs in Punjab, the way the voice of students in FTII was muzzled.
The government machinery is being misused and is trying to crush the voice of the dissident and those having the contrary view,” he said.He also questioned the silence of Prime Minister Narendra Modi, saying “He tweets on every other thing, but it took five days for him to speak on this matter, only after a worldwide uproar. There is no reference on in the Mann Ki Baat.”
Mr. Scindia said while the government was celebrating 125th century of Dr Babasaheb Ambedkar, it was not following its path. “There is huge gap between the talk and the act of the government.”

Mr. Scindia said nobody supports the slogans which were chanted in JNU but slogans cannot be criminalised and termed as treason.He alleged that the government was angry with JNU because it stood against “saffron terrorism”, Dadri lynching, RSS and the suicide of Rohith Vemula in the Hyderabad University.
JNUSU President Kanhaiya Kumar was targeted for his opposition to RSS and ABVP, the Congress leader said.From BJP side, Anurag Thakur raised the nationalist pitch over the JNU issue and attacked Congress, saying for the party, “it is ‘family first’, ‘party next’ and ‘nation last’.
For us, it is ‘nation first’, ‘party next’ and ‘family last’”.He alleged that Rahul Gandhi went to the university to support such outfits which were named by the previous UPA government as “frontal organisations” for Maoists.
“I want to ask Sonia ji, why your young leader was standing with those who stand with Afzal Guru,” Thakur said addressing the Congress president who was present there.
His speech saw protests from Congress members who raised a point of order, saying he was levelling “derogatory allegations” against Mr. Gandhi, a contention rejected by the Speaker.
He alleged that when 74 security personnel were killed in a naxal attack in Dantewada in Chattisgarh a few years back, there were celebrations in JNU.
Mr. Thakur also referred to the Batla House encounter in which a Delhi Police inspector had died in an encounter with terrorists and said that a Union Minister belonging to Congress had then said Sonia Gandhi “cried” over the death of terrorists.“You did not go to the house of the martyred Inspector. Rahul Gandhi also could not go. But he went to JNU,” he said.
Earlier, Scindia said, “Live and let live in India.’In a swipe at Home Minister Rajnath Singh over his claim that LeT founder Hafiz Sayeed had supported the controversial JNU event, the Congress leader said Mr. Singh had no face to show after it was found the Hafiz’s tweet was fake.
He also referred to controversial statements by several BJP leaders, including an MLA’s remarks that Mr. Gandhi be shot, and said action should have been taken against them.He termed as a joke the HRD Ministry’s decision following the JNU row that all universities will hoist tricolour.