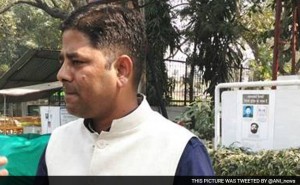 NEW DELHI: Vikram Singh Chauhan, the most prominent among the lawyers involved in two incidents of violence at a Delhi court last week, has been arrested. He had appeared before the police today, six days after he was summoned.
Mr Chauhan had been called by the police last Thursday for questioning on the riots at the Patiala House court hearing on the case of Kanhaiya Kumar, the Jawaharlal Nehru University (JNU) student arrested on sedition charges.
“I am an ordinary Indian, not affiliated to any party. Media channels are projecting me as a criminal but the allegations against me are yet to be proved,” Mr Chauhan told reporters outside the police station. He claimed that he would be cleared by video evidence.
Two other lawyers, Yashpal Singh and Om Sharma, also appeared before the police and were granted bail.
Last Monday, Mr Chauhan was among the mob of lawyers who assaulted journalists and students and teachers of JNU before a hearing on the student. The same lawyers struck on Wednesday at the same court, once again before Mr Kumar’s hearing, shouting slogans.
As Mr Kumar was escorted into court by the police, he was kicked and punched.Ignoring the police summons, Mr Chauhan organized a march on Friday to protest against what he called a “campaign by a section of the media” to tarnish lawyers.
“Lawyers are also Indian citizens, how can anyone allow anti- India slogans or pro-Pakistan slogans being raised in India?” Mr Chauhan said.
On Facebook and WhatsApp, Mr Chauhan and his colleagues praised each other’s “lion-hearted heroism”.All three accused lawyers purportedly bragged about beating Kanhaiya Kumar in a sting shown by a TV channel. The Supreme Court has agreed to hear a petition demanding action based on the sting footage.