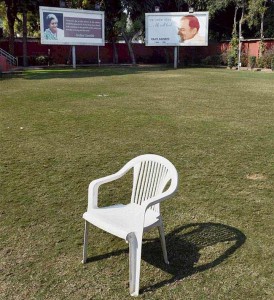 NEW DELHI : A day after scoring a zero in the Delhi election, the Congress offered no explanation for the rout,   The party cancelled its routine press briefing on Wednesday, perhaps to avoid questions that could exacerbate its ignominy.
On counting day, Ajay Maken, the party’s media chief and its face in the Delhi election, was the only one to field a battery of  questions from the media.
Arvind Kejriwal and his Aam Aadmi Party or AAP won 67 of the 70 seats in the Delhi legislature.  The BJP won the remaining.  In the last Delhi election a year ago, the Congress had won eight seats.  This time around, the party has been laid off entirely by the city.The tough times have also led rivals factions to trade charges. “If the Congress leaves out its development plank from its campaign, the good work it did in Delhi in the past 15 years, then what remains of the party?” asked senior leader Manish Tewari, who’s longer a part of the Congress official communication team.
PC Chacko, who oversaw the Delhi elections for the Congress, countered, “I don’t want to get into a controversy, but the people who make such statements should have checked with those who prepared the campaign strategy. Our manifesto started with the work done by our government.”
Ajay Maken met the Congress’  top two leaders, Sonia Gandhi and Rahul Gandhi, to reiterate his offer to quit all party posts. “Since I was the face of the elections and I could not even win my own seat, I take moral responsibility ,” said Mr Maken. PC Chacko made a similar offer in a meeting with Mr Gandhi this evening to analyze the Delhi result.
So far, the Gandhis have not indicated whether resignations will be accepted. Nor has any party leader suggested that the Gandhis themselves be held accountable for yet another electoral disaster.

For 15 years, the Congress was unshakeable in Delhi, with Sheila Dikshit serving three terms as Chief Minister. The party was rudely pushed to third place in the 2013 election, after which the Aam Aadmi Party formed the government.  A few months later, in the national election, the Congress lost all 7 parliamentary seats in Delhi.
In an earlier interview, Mr Maken had explained he absence of Ms Dikshit by saying,”We have a tradition of projecting only our party president, vice president and the stage chief in posters and banners. Besides we are also offering new things.So that’s when people ask why you couldn’t do them in your 15 year rule.”
Sharmishta Mukherjee, who polled only 6,000 votes in South Delhi’s Greater Kailash constituency, said she got some much-needed succor from her father, President Pranab Mukherjee.   “He told me that I can’t lose heart. I was depressed and rejected , but I will work hard from tomorrow,” she said.