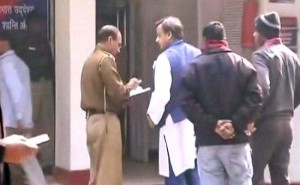 NEW DELHI :Congress MP Shashi Tharoor is being questioned today for the second time on the alleged murder of his wife Sunanda Pushkar a year ago.Mr Tharoor had last been questioned on January 19, when he was reportedly asked over 50 questions by a team of four officers.

The Delhi Police say this session is linked to the questioning of Shiv Menon, the son of Sunanda Pushkar by a previous marriage, earlier this month.
“We have got some information from the SIT (Special Investigative Team) which was analysing Shiv Menon’s statement and regarding that we need to question Tharoor and other members,” Delhi Police Commissioner BS Bassi said on Wednesday.
Sources say the Indian Premier League may come up during the questioning. Mr Tharoor had to resign as union minister in 2010 after accusations of corruption linking him to the cricket franchise for his home state of Kerala. Ms Pushkar was allegedly given stakes worth about $15 million (around Rs.94 crore) for free.
The Tharoors’ domestic help Narain Singh and driver Bajrani are also being questioned today. Narain Singh has been questioned three times before.
On January 6, the police launched a murder inquiry after stating that Ms Pushkar, who was 52, was poisoned, but did not name a suspect. Mr Tharoor said that he was stunned to discover the police believe she was killed.
Ms Pushkar was found dead in her bed in a hotel suite on January 17, days after she publicly accused her husband of having an affair with a Pakistani journalist.
The police have questioned some 20 people, including friends, aides and staff members of the Tharoors, who married in 2010. Politician Amar Singh and journalist Nalini Singh have also been questioned.

In his last questioning, Mr Tharoor “answered most questions” and did admit to some extent that there was marital trouble, said sources. A year ago, just after the death, he had told investigators that there were “misunderstandings” but he and Sunanda had a largely happy marriage.