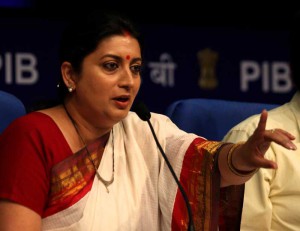 NEW DELHI: Amid the ongoing controversy over the family members of a doctor killed in a road accident allegedly involving Union HRD Minister Smriti Irani accusing her of looking away from the dying man and driving off, the Congress Party on Tuesday said that it was a very irresponsible gesture on her part.
Congress leader P.L Punia said Irani, being a responsible citizen and a minister in the NDA Government, should have helped the girl.’I don’t want to go into the details as to how did the accident took place, but she must have offered help. This is very irresponsible on her part,’ he added.
Echoing similar sentiments, Congress leader Sandeep Dikshit said it is a very strange situation that has been created. ‘Nobody does accidents willingly. But when you are a person, who represents the government, you should have stopped and helped the victim,’ Dikshit said.
‘Smriti Irani is being attacked for a long period now because of her behaviour. She does not think herself to be a common man. The kind of behavior she has with the vice-chancellors, the way she gave speech in the Parliament, she is behaving more like a queen and less like an elected person,’ he added.
The daughter of the victim, who died after Irani’s cavalcade hit their vehicle, yesterday said that she pleaded before her with folded hands but the Union HRD Minister didn’t provide them any help.

However, eyewitness Manoj Chopra contradicted the statement made by the victim’s daughter and said Irani came out of the car immediately and made calls for help. Irani’s convoy was caught in a car pile-up following an accident on the Yamuna Expressway on Saturday. However, Irani, who was on her way to Delhi, escaped unhurt.
In a series of tweets following the accident, the HRD Minister had earlier informed of her well-being and thanked the people for their concern. “Tried to help the injured who were lying on the road for quiet sometime and ensured they reach a hospital. Pray for their safety,” she said.
Irani said that she also ensured the people injured in the accident were taken to a hospital and thanked others for helping out. An FIR has also been registered in connection with this accident.