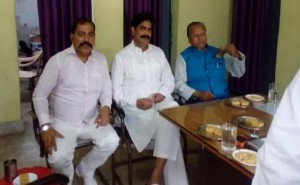 PATNA: A minister from Lalu Prasad’s RJD has landed the Nitish Kumar government in a controversy again. Minority affairs minister Abdul Ghafoor was recently seen meeting gangster politician Mohd Shahabuddin at a jail in Bihar’s Siwan district — leaving the government open to attacks by the opposition.
Shahabuddin has been convicted in multiple cases including murder and has been in jail for more than a decade. His name had spelt terror in the region for years.
They were photographed together. In the photo, the former RJD parliamentarian is seen sitting flanked by the minister and an RJD lawmaker. All three are having refreshments — in total violation of prison rules.
The photo, apparently posted on Facebook by a Shahabuddin supporter, has triggered a full-blown political controversy.The BJP, which lost last year’s assembly elections in the state to the Grand Alliance led by Nitish Kumar, said it was yet another sign of the worsening law and order situation in Bihar.
“Sahabuddin is in jail for serious crimes. Lalu Prasad should feel ashamed that he had not reprimanded the minister. How Nitish Kumar will bring law and order in Bihar until such people are in alliance with him?” questioned senior BJP leader Sushil Modi.

The minister insisted that such a meeting is normal. “I met him on March 6. I was in Siwan to inaugurate a school and since he used to be a partyman,  I paid a courtesy call to him.  That’s it,” Mr Ghafoor said.
His party chief Lalu Prasad was even more casual. “What is the issue in it?  They were eating something then what is the problem in it? When I was in jail, people used to come and we used to have tea and refreshments.”
In December, a Siwan court sentenced Shahabuddin to life imprisonment for a double murder of 2004. Satish Raj, 25 and Girish Raj, 20, sons of a businessman, were abducted, drenched in acid and killed.
The BJP had earlier targeted the government over the actions of Mr Prasad, who has lately raided hospitals and turning up for functions of the health ministry. His son Tej Pratap Yadav is the health minister.