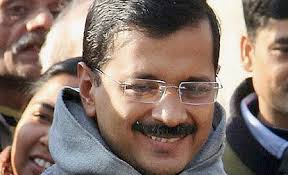 NEW DELHI : cabinet will today discuss a proposed anti-graft law that seeks to punish corruption with a maximum sentence of life in jail. The Jan Lokpal Bill, born out of the anti-corruption movement that was the inception point of Mr Kejriwal’s one-year-old Aam Aadmi Party (AAP), is being described as a far more stringent version of the central Lokpal law enacted earlier this month.
“The Lokpal Bill that the Centre passed can’t even kill a mouse, let alone end corruption,” Mr Kejriwal scoffed at a party meeting.
Sources say the AAP’s Bill seeks six months to life in jail for corrupt officials. The Lokayukta, or anti-corruption ombudsman, will reportedly have separate arms for investigation and prosecution. The Lokayukta can decide whether the accused official will be dismissed, removed or shunted out. It would also have the powers to confiscate property and assets of the accused official, say sources.
If the bill is enacted, a Delhi Lokayukta would have more powers than those prescribed under the central Lokpal law, which says the watchdog has to get complaints looked into by investigating agencies like the CBI. The CBI is under the administrative control of the government and would not be entirely independent, say critics.

Sources say the Jan Lokpal Bill sets a deadline of six months for any investigation into corruption charges. Mr Kejriwal reportedly wants the office of the Chief Minister to come under the ambit of the Lokayukta, besides those of legislators.

Mr Kejriwal has promised to pass the Delhi bill in a special session of the assembly in February, but it will need Presidential assent, which raises the possibility of a confrontation with the Centre.