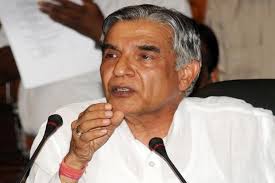 NEW DELHI : Former railway minister Pawan Bansal, who made it to the list of Congress candidates for next month’s national election despite a cash-for-jobs scandal on his watch, today said he was “willing to be stoned” if he was found guilty of any wrongdoing.The 65-year-old is contesting from Chandigarh, which has voted him since 1999. The Congress’ decision to field him again may have been political expediency but it has been criticized at a time fighting corruption has been a dominant theme in poll campaigns.
Mr Bansal sought to silence all questions with a dramatic statement. “I am willing to be stoned in the middle of Chandigarh if I am guilty,” he told NDTV on the campaign trail.On Wednesday, Congress president Sonia Gandhi defended her decision to field another controversial leader, Ashok Chavan, who was named in the Adarsh housing allotment scam in Mumbai. “No law bars him from contesting the polls,” Mrs Gandhi firmly told reporters who accused the party of double-speak on corruption.
Last year, Mr Bansal was forced to resign as Railway Minister after his nephew Vijay Singhla was caught taking Rs. 10 crore to facilitate the promotion of a railway board member. Mr Bansal was never mentioned in the CBI’s charge-sheet as an accused but was grilled by investigators for hours, especially because kickbacks were allegedly discussed at his official residence. “I was relieved when the CBI questioned me as they had nothing,” he said today.
The four-time MP faces high profile rivals in Chandigarh this time – actors Kirron Kher and Gul Panag from the BJP and Aam Aadmi Party, who have lately been seen sparring on twitter over age.”I am 65 and older but I can outrun both of them,” he joked, admitting that he was oblivious to the fight as he is not on social media.