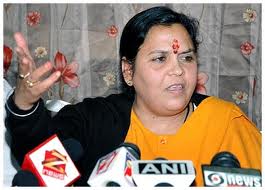 BHOPAL : Uma Bharti today deflected a question on yoga guru Baba Ramdev’s suggestion that the BJP should field her against Congress president Sonia Gandhi in Rae Bareli, Uttar Pradesh.   The 54-year-old leader, known as a firebrand politician, told NDTV, “Ramdev is like a guru and younger brother to me. His proposal is for the BJP, the BJP has to give a reply. I am already campaigning in Jhansi now.”
Ms Bharti has already been named by her party as its candidate in Jhansi, also in Uttar Pradesh, where she will take on union minister Pradeep Kumar Jain ‘Aditya’ of the Congress. The party is yet to announce who will contest from Rae Bareli and from neighbouring Amethi, the constituency of Mrs Gandhi’s son and deputy, Rahul Gandhi. Similarly, the Congress is yet to name a candidate against the BJP’s prime ministerial candidate, Narendra Modi in Varanasi.
Yesterday, Baba Ramdev, who has aligned himself with the BJP and recently shared the stage with Mr Modi said at a press conference, “If the BJP wants to defeat Sonia in Rae Bareli, it must field Uma Bharti from the constituency.”
He offered to conduct a door-to-door campaign for Ms Bharti in the Gandhi family stronghold.
Ms Bharti belongs to Madhya Pradesh and there was speculation that she wanted to contest the general elections from Bhopal, a seat she has won before, after the BJP rejected senior leader LK Advani’s request that he be allowed to shift there from Gandhinagar this time. Ms Bharti today said her having wanted to contest from Bhopal was “a rumour.” The outspoken BJP leader, who describes herself as a “sanyasin” or a monk, returned to the BJP in 2011, six years after she was expelled for indiscipline.Mrs Gandhi has been winning from Rae Bareli – held for many years by former Prime Minister Indira Gandhi, since 2004 – when she shifted from Amethi to make way for Rahul.