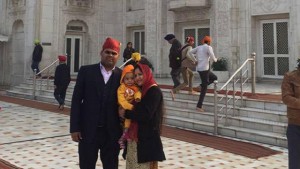 GHAZIABAD: Bahujan Samaj Party (BSP) Rajya Sabha MP Narendra Kashyap’s son has been arrested under Dowry Act in connection with the death of his wife.
Himanshi Kashyap, the daughter-in-law of the lawmaker was on Wednesday found dead inside the bathroom of their house in Sanjay Nagar in mysterious circumstances, after which an FIR was filed against the Narendra Kashyap and his family members under anti-dowry law.
Father-in-law Narendra who has been admitted to the hospital after he complained of chest pain will be arrested after being discharged from the hospital.

Speaking to Reporters, Salman Taj, SP of Ghaziabad said, “We have registered FIR on the basis of complaint by victim’s father.FIR is registered under sections of 498 A, 304 B of IPC and section 3/4 of Dowry Act. MP Narendra Kashyap’s son Sagar has been arrested. MP Narendra Kashyap will be arrested after being discharged from hospital.”

HO Kavindra Nagar Ashok Shishodia said that Hariom Kashyap, Himanshi’s uncle in his complaint, alleged that Narendra Kashyap’s family members used to torture the girl for not bringing enough dowry. They always insisted on her to bring a Fortuner SUV from her parents.

Himanshi, the daughter of former BSP minister Hiralal Kashyap was married to Sagar three years ago and the couple have a one-year-old son.