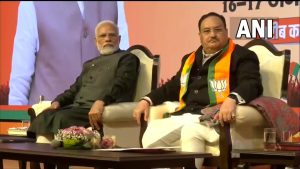 At the national executive, the BJP leadership may announce a year’s extension for party president JP Nadda, whose tenure ends later this month. And deliberate on its strategy for assembly and general elections, is started in the national capital with Prime Minister Narendra Modi joining a brainstorming session. Mr Nadda’s three-year term as the national president ends this month. He is likely to lead the party till the 2024 Lok Sabha elections are over.
There could be three resolutions to cover political, economic and foreign policy issues, though there’s no final word yet. The party will go all out to promote G20 events following India getting the presidency of the elite grouping of 20 leading economies of the world. 2023 is the year that will see nine states go to the polls. They are Tripura, Nagaland, Meghalaya, Karnataka, Mizoram, Chhattisgarh, Rajasthan, Madhya Pradesh, and Telangana. Elections could also be held in the Union Territory of Jammu & Kashmir.
According to BJP sources, the three resolutions of the National Executive meeting encompass political, economic and international affairs. The strategy for the upcoming assembly elections in nine states slated this year and the Lok Sabha elections to be held next year will be discussed.

PM Modi arrived at the venue after a mega roadshow of about one kilometre — from Patel Chowk to the NDMC head office in central Delhi. Enthused BJP workers and supporters lined the roads to greet Prime Minister Narendra Modi during his roadshow here as the party’s two-day national executive began in Delhi on Monday. In an atmosphere enlivened by music and the cheering crowd, the roadshow started from Patel Chowk and continued till the NDMC convention center. People showered Modi with flower petals and chanted slogans in his support.
Huge cutouts of the prime minister were placed along the road, besides several posters highlighting various initiatives of the government and also India’s presidency of the G20.Stages had been erected at places. Folk artistes from several states performed on some of them, while others blared patriotic songs.BJP workers and supporters lined the roads and greeted the PM by showering flower petals and chanting slogans, while he waved to his supporters throughout the road show from his car.
BJP’s ‘Pravas Yojna’ for weak Lok Sabha seats and strengthening of booth-level teams will also be discussed. Leaders can also be entrusted with big responsibilities related to the electoral state, informed party sources.This is the first major meeting of the party after the landslide victory in Gujarat. Ahead of the big event, Mr Nadda held a meeting with in-charges and co-in-charges from across the country.. 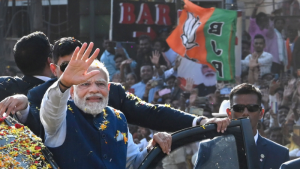