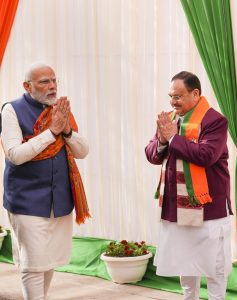 NEW DELHI : “The BJP national executive unanimously decided to extend party president Jagat Prakash Nadda’s term till June 2024,” Amit Shah announced at a press conference. “We are confident that under Prime Minister Narendra Modi and BJP president Nadda, the party will win 2024 Lok Sabha polls with bigger mandate than 2019,” Mr Shah said.
Mr Shah today underscored that the BJP won many state elections under Mr Nadda’s leadership and expressed confidence that it would achieve a bigger mandate than 2019 in 2024. He also lauded Mr Nadda’s leadership during the pandemic, saying he connected the party organisation with the service of people.Besides, caste equations are also in favour of Mr Nadda.
The announcement came on the second and concluding day of the BJP’s national executive meeting, which is being held in Delhi. Prime Minister Narendra Modi, and other top leaders, including Union home minister Amit Shah, defence minister Rajnath Singh, party president JP Nadda and BJP chief ministers, are attending the all-important meeting. The BJP national executive meet, which extended Nadda’s presidency, will draw a roadmap for the upcoming crucial state polls that will set the tone for 2024 when PM Narendra Modi seeks a third straight term.
The term in that post has been extended to June 2024, with the party now poised to face the next General Elections with him at the helm. The decision, one of the expected outcomes of the BJP’s national executive meet, was endorsed on the final day of the two-day meet being held in New Delhi. It also quietens speculation on whether the BJP’s loss in Himachal Pradesh, Mr. Nadda’s home State, would be laid at his door.
Praising Mr. Nadda in a fulsome manner, Mr. Shah said that the extension of tenure was not without precedent (Mr. Shah himself had secured an extension in the run-up to the 2019 polls) and was also necessitated by the fact that internal organisational polls and membership drives had not been possible due to the COVID-19 pandemic. He said that the BJP, under the leadership of Prime Minister Narendra Modi and the organisational hand of Mr. Nadda, was poised to win the 2024 General Elections with a bigger mandate than in 2019.
He said that the BJP had logged many victories in States like Uttar Pradesh, Uttarakhand, Assam, Goa, Manipur, and the highest strike rate for the party in Bihar, under the stewardship of Mr. Nadda. “His sensitivity and the vibrant way in which he steered the party’s ‘ Sewa hi Sanghathan’ outreach during the COVID-19 pandemic, and directing party workers in providing help, is especially worth appreciating,” Mr. Shah said.
According to sources, the decision to extend Mr. Nadda’s tenure was taken at a meeting of the BJP’s parliamentary board in 2022, to be endorsed in the earliest possible meeting of the national executive. According to the BJP’s constitution, Mr. Nadda’s tenure was to end in January 2023 as he had been elected for a three year term in January 2020.Mr. Shah asserted that the BJP is a political party in India which follows democratic processes and values in its functioning the most. “Right from the days of Jan Sangh’s establishment to date the BJP has conducted elections from booth to the national president as mandated by our constitution. Following immaculate methods of democracy,
Mr. Nadda began his political career in the Sangh Parivar when he joined the Akhil Bharatiya Vidyarthi Parishad (ABVP), the youth wing of the Rashtriya Swayamsevak Sangh (RSS), in Patna University in the late 1970s, and served as the organisation’s national general secretary between 1986-1989. He was made president of the Bharatiya Janata Yuva Morcha (BJYM), the BJP’s youth wing in 1991.
From there, he contested Assembly polls from Bilaspur in Himachal Pradesh, his home State, in 1993, was re-elected in 1998 and made State Health Minister in the then BJP government. He made a comeback to the Himachal Pradesh State Ministry in 2007, after having lost in the 2003 polls.
His equations with certain leaders in the State were not what was hoped for and he moved to Delhi to the party’s national team thereafter, not seeking re-election in 2012. He was Union Minister for Health under Mr. Modi in 2014, only to exit that position to be working president of the party in June 2019, and then to be duly elected as president in January 2020. The extension of Mr. Nadda’s tenure as the BJP’s national president, of course, lays open a new question on who his successor will be in 2024. “The tenure of JP Nadda as national president of the BJP.
Talking about next year’s general elections, Amit Shah said, “I am sure that under the leadership of Modi ji and with Nadda ji, we will win more seats than 2019 in 2024 polls.”
(Bureau Report with Media Inputs)