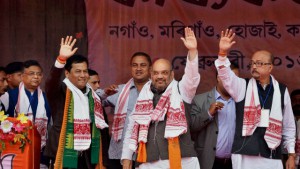 GUWAHATI: To oust the Tarun Gogoi-led Congress government in the state, Asom Gana Parishad (AGP) and BJP has decided to forge an alliance ahead of the Assam state elections.
The two parties have allied together before, but at the time AGP has been the senior partner. BJP, after its credible performance in the Lok Sabha election, has tried to project itself as an alternative to the Congress government which has ruled for three consecutive terms in the state.
The BJP had earlier projected Union Minister Sarbananda Sonowal as their CM candidate. Now, by sealing an alliance with AGP, the party is trying to forge a formidable alliance in the poll-bound state.

On Wednesday, former Assam CM Prafulla Mahanta met BJP Chief Amit Shah, where the decision was taken. The announcement was made by Sonowal.The saffron party had earlier ruled out any chance of an alliance, but it probably had a rethink as Assam is the only state where it can realistically come to power. Seat-sharing announcement hasn’t been made so far.
He said the seat sharing arrangement will be sorted out in two – three days. Mr. Sonowal accused the Congress of ruining the state saying the alliance will bring the pride of Assam and work for the rehabilitation of families of martyrs of Assam agitation, employment for youth and relief from recurring floods.
126 member state assembly will go to poll in April- May this year. Ruling Congress has already announced to fight the elections alone.
As per reports, BJP workers in different parts of Assam have erupted in protest against the party’s alliance with Asom Gana Parishad. The two parties had contested polls in the state unitedly in 2001 assembly election and 2009 Lok Sabha polls.