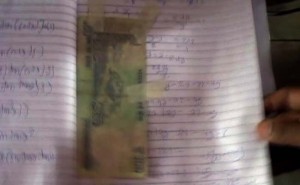 SAHARSA(Bihar):  Recent images of parents scaling the walls of an exam centre to help students cheat shamed Bihar and drew international attention to the appalling state of its education. A random check at a centre where exam papers are being checked reveals that even some evaluators would need help to pass a test.
At a school in Saharsa district, Tamanna Ali is evaluating the English answer papers for the Class 10 exams. Asked to spell ‘Shakespeare’, this is what he came up with: “S-h-a-k-s-p-e-a-r.”
tried another examiner with the same results; he also failed a pop quiz.
The teacher evaluating math papers was asked to explain the relevance of Pythagoras, the Greek Mathematician credited with the theorem taught to children in Class 9. His response was a puzzled look. Asked to spell ‘Mathematics,’ he replied: “M-a-t-h-m-a-t-e-s.”  Another teacher found a 100 rupee note diligently taped to an answer sheet, perhaps by a student who thought the money would buy him passing marks.
Earlier this year, a court ordered the sacking of nearly 3,000 primary school teachers who had failed to clear competency tests twice. The teachers had been tested for their knowledge of English, Math, Hindi and General Knowledge for up to Class 5.
Some 1,700 examinees and 38 students were expelled, and 132 parents were arrested last month after online footage of blatant cheating at exam centres went viral and even made it to foreign newspapers.
State education minister Prashant Kumar Shahi, addressing a news conference after the scandal, said: “Should we shoot them?” He summed up the state’s helplessness on a problem that has dogged Bihar’s schools for decades.