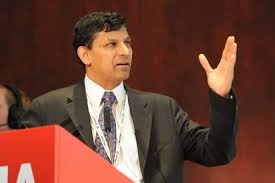 The notion that banks’ cost of funds hasn’t fallen is “nonsense”, Dr Rajan said at a press conference today. “When banks have to raise rates, they quote higher policy rates… Why don’t they cut when policy rates go down,” he added.
Dr Rajan’s harsh comments reflect the uneasiness of the RBI with banks, who have not lowered lending raters despite the RBI slashing repo rate from 8 per cent to 7.5 per cent between January and March this year. Repo rate is the rate at which the RBI lends short-term money to banks.
Urging banks to cut rates, Dr Rajan said, “The sooner rate transmission happens, better it is for the economy.” Base rate, which is the minimum lending rate for retail consumers, continues to be in double digits. Analysts say lowering of base rate will boost demand for home and auto loans, a move that will drive consumer demand and help the economy.
Dr Rajan today said that RBI’s stance (on interest rates) has turned accommodative in January and it remains so, in an indication that the central bank may cut rates further this year.
In Tuesday’s policy announcement, the RBI held repo rate unchanged at 7.5 per cent, as expected. Another key ratio, the CRR or cash reserve ratio, which is the amount of deposits lenders must keep with the RBI, was also left unchanged at 4 per cent.
“What we are waiting for is more information about the effect of weather disturbances and more information on the likelihood of reasonable monsoons,” Dr Rajan said.
Earlier-than-expected rainfall in parts of the country has pushed up prices of winter crops, such as wheat and pulses, which has made the RBI cautious over the outlook for inflation, analysts said.