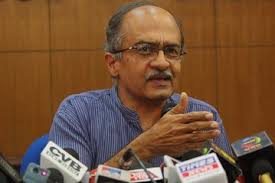 NEW DELHI : The Aam Aadmi Party (AAP) alleged today that a huge cover-up was engineered in the telecom scam to protect parliamentarian M Kanimozhi, the daughter of M Karunanidhi, who heads the DMK.
Prashant Bhushan, a senior leader of the AAP, said today that leaked audio tapes prove Kanimozhi’s complicity in accepting a 200-crore kickback from a telecom firm which was among those who received an out-of-turn mobile network license by her party’s A Raja when he was Telecom Minister in 2008. Mr Raja and Kanimozhi have both spent time in jail on criminal charges in connection with the telecom swindle, worth 1.76 lakh crores according to the national auditor.
Mr Bhushan, a lawyer-activist, said that M Karuanidhi, the 89-year-old chief of the DMK, “was in the know and involved with the cover-up.” “It is all lies, all lies, all lies,” Karunanidhi said today.
The CBI, which is investigating the scam, has said that Swan Telecom routed a huge bribe to Mr Raja through a television channel in Chennai which was partly owned by Kanimozhi and her stepmother.  The top executive of the channel, Sharath Kumar, has also done time in prison.
Over the weekend, phone conversations posted online allegedly reveal him admitting that he destroyed evidence and altered company documents to protect Kanimozhi.
AAP said it cannot verify the authenticity of the tapes but said they “appear genuine.”
Sources close to Kanimozhi say that the tapes do not refer to her by name and that she is not implicated in the conversations.  After Mr Bhushan levelled his charges against her in Delhi, she was visited at her Chennai residence by Sharath Kumar.
AAP, which is led by Arvind Kejriwal and formed the government in Delhi a month ago, has positioned itself as an anti-corruption party and says it is committed to exposing graft in the Indian polity.