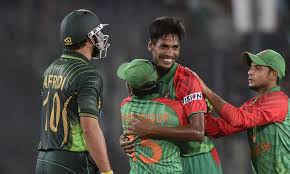 Bangladesh beat Pakistan by five wickets to qualify for the final of the Asia Cup T-20 cricket tournament. In the match played at Sher E Bangla Stadium in Mirpur last night, Bangladesh chased down the target of 130 with 5 balls to spare.
The match was equally poised till the second last over, with Bangladesh requiring 18 runs in 12 balls with 5 wickets in hand. Pakistan’s pace bowler Mohammad Sami leaked 15 runs in that over making victory way easy for the hosts. Bangladesh overhauled the target in 19.1 overs as they made 131 for 5, with Soumya Sarkar being the highest scorer with 48 runs.
Earlier, after winning the toss Pakistan opted to bat first. They made moderate 129 for 7 with Sarfaraz Ahamd top scoring at 58. Bangladesh will meet India in the finals on Sunday.