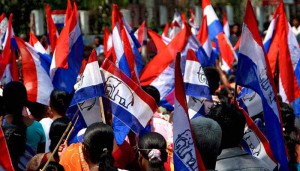 NEW DELHI: The BJP said on Thursday that the Asom Gana Parishad ​(AGP) will be fighting on 24 seats out of 126 in the upcoming Assembly elections in Assam.
“BJP-AGP has similarity on one issue in Assam – illegal infiltration from Bangladesh,” said BJP leader and Union Minister Ravi Shankar Prasad while addressing the press.
He added, “Next we need to take down the corrupt Tarun Gogoi government in Assam.”Union Minister and Assam BJP chief Sarbananda Sonowal, who is the alliance’s chief ministerial candidate, and AGP chief Atul Bora besides BJP General Secretary Ram Madhav were also present at the media conference.
The BJP-led alliance will come out with a common minimum programme.”All indigenous and our people are one side and UDF with the blessings of Congress on the other,” Himanta Biswa Sarma, BJP leader and convener of the state’s Election Management Committee, told the media.
Yesterday, former CM and AGP leader Prafulla Kumar Mahanta had announced that BJP and AGP would jointly fight the coming Assam Assembly elections.The announcement had came after top AGP leadership had an hour-long discussion with BJP President Amit Shah.
“We had a meeting with the BJP President where we have decided to contest the coming Assam Assembly polls together,” Mahanta  told .Sonowal, Bora besides others were present in the meeting.

BJP has already entered into a tie-up with Bodoland People’s Front, which will contest 16 seats, besides two other outfits representing local tribes.Election to the 126-member Assam Assembly is expected to be held in April-May.
BJP and AGP had an alliance in 2009 Lok Sabha polls in which the saffron party bagged four seats and AGP just one.The two parties considered an alliance ahead of the 2014 Lok Sabha polls but the regional party had backed off, apparently on the assumption that such an understanding would not be beneficial for AGP.
In 2014 Lok Sabha polls, BJP won seven of the state’s 14 seats and AGP drew a blank. BJP won in Dibrugarh, Jorhat, Nagaon, Tezpur, Lakhimpur, Mongoldoi and Guwahati, all considered to be former AGP strongholds.
Mahanta became Assam’s Chief Minister for the first time at the age of 32 in 1985 after leading a six-year-old agitation against illegal migration from Bangladesh as president of All Assam Students Union.
Mahanta was Assam’s Chief Minister between 1985 and 1990 and again from 1996 to 2001.Sonowal was in AGP before joining BJP about four years ago. He was an AGP MP between 2004-2009.Several other senior BJP leaders were also earlier with AGP.