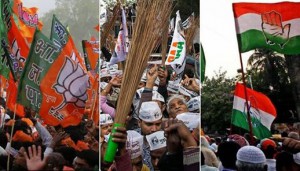 NEW DELHI : A day after exit polls predicted an AAP win in Delhi, its visibly relaxed leader Arvind Kejriwal on Sunday watched a Hindi movie as the BJP insisted it was still confident of winning the election with wider national ramifications.
“We were always confident of winning,” Aam Aadmi Party leader and former minister Manish Sisodia, a Kejriwal confidant, told IANS. He said he agreed with the exit poll findings “plus or minus one or two seats”.
But other AAP leaders sounded more cautious. “We will accept the congratulatory messages only after the results come out Tuesday,” a party leader told IANS.Former Delhi chief minister Kejriwal was “cool” Sunday, his colleagues said, after weeks of hectic election campaign that kept him busy every day from 6 in the morning to midnight.
In the evening, Kejriwal went with a large group of AAP colleagues to watch Akshay Kumar-starrer “Baby” at the Wave cinema close to his home at Kaushambi in Ghaziabad district adjoining Delhi.
Flanked by Sisodia and Kumar Vishwas, he smiled as a photographer clicked him.
Barring one, four major exit poll surveys have given a clear majority in the 70-member Delhi assembly to the AAP, which fought a tough battle as it took on Prime Minister Narendra Modi’s BJP.If the AAP wins, it would be seen as a blow to Modi, who took on Kejriwal vocally in election rallies.
The mood in the Bharatiya Janata Party was clearly subdued but senior leaders put up a brave face, saying they were hopeful of edging out the AAP.
BJP’s chief ministerial candidate Kiran Bedi met party leaders to review the election. Satish Upadhyay, president of the BJP’s Delhi unit, said the party was confident of forming a government.”I am not commenting on the exit polls but we are confident of winning the election and forming a government under Bedi’s leadership,” Upadhyay told.
BJP leader and central minister Nirmala Sitharaman met Bedi and echoed Upadhyay’s sentiments. “We are hopeful we will win.Asked about Bedi’s comments that she would take the blame if the BJP lost, Sitharaman said: “She has given her personal view.”
In contrast to the subdued glee in the AAP – Kejriwal told his activists to relax until the votes are counted Tuesday – and the BJP’s fervent hopes that the exit polls are wrong, the Congress was shattered.
Exit polls said the Congress, which ruled Delhi for 15 years until December 2013, would be wiped out or at best get four seats out of the 70. The Congress won eight seats last time.
A senior party leader told IANS on the condition of anonymity: “If the exit polls are correct, it will be a matter of concern for us.”
On polling day Saturday, Congress president Sonia Gandhi made no claim that her party would win. In a tacit admission of defeat, she said: “Whatever people desire will happen.”
The Delhi election saw a record voter turnout of 67.14 percent, according to the Election Commission. At some places voting was allowed even after 6 p.m. as voters had already entered the polling premises.
The AAP cornered a stunning 29.64 percent of all votes in 2013 to win a stunning 28 seats. This led to a 49-day Congress-backed AAP government.Its vote share in the Lok Sabha election last year went up to 33.08 percent although it could win none of the seven parliamentary seats in the capital.
Exit polls said the AAP could now end up with 41-43 percent of votes.
Today’s Chanakya exit poll said all major segments — Dalits, Banias, Brahmins, OBCs, Muslims and Punjabis — voted more for the AAP than the BJP.This despite the fact that BJP’s Bedi, a Punjabi, was expected to attract most Punjabi votes.