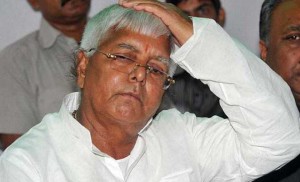 PATNA: Lalu Prasad Yadav is heading into a new controversy, handing the Opposition reason to allege that he interferes in the Bihar government ministries headed by his sons Tejashwi and Tej Pratap. This time it is Tej Pratap’s health ministry.
A letter written by the civil surgeon in the state’s Darbhanga, the district’s top doctor has surfaced, in which the doctor writes that he has been ordered by the Rashtriya Janata Dal chief to reinstate four contractual workers who were retrenched.
Lalu Yadav had visited the Indira Gandhi Institute of Medical Science in Patna a few days ago, and the civil surgeon Dr Sriram Singh says in his letter to the hospital’s superintendent that he received verbal orders from the RJD chief, who first asked about the removal of the four workers.
Dr Singh also writes that he must be informed once the four workers are reinstated, so that he can inform Mr Yadav.Lalu Yadav confirmed that he had spoken to Dr Singh, pleading that he makes many phone calls every day. He said he had told Dr Singh to merely look into the matter, but the latter decided to document it.

The Principal Secretary, Health, of Bihar has now summoned Dr Singh, whose removal was sought by a senior bureaucrat a few months ago. The Darbangha District Magistrate Kumar Ravi had written to the Principal Secretary alleging that the civil surgeon “was mentally unstable and unfit to discharge his duties.”
The RJD, which fought the assembly elections last year in coalition with Nitish Kumar’s Janata Dal United and the Congress last year, emerged as the single largest party in the state, with the alliance winning an absolute majority.
His party’s stupendous performance meant that Lalu Yadav – who cannot contest elections or hold public office because he has been convicted in a corruption case – could negotiate top ministries for his sons, both first-time lawmakers and political novices.

They took oath directly after Chief Minister Nitish Kumar in November which made it clear where they stand in the Bihar government. While 26-year-old Tejashwi who is also state’s Deputy Chief Minister holds Road and Building Construction and Backward portfolios, Extremely Backward Welfare, Tej Pratap, 28 heads the Health, Minor Water Resources,Environment and Forest ministries