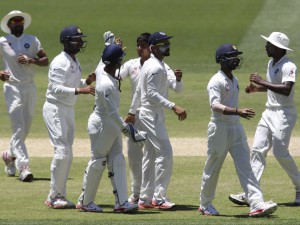 NEW DELHI : Security around Indian cricketers has been beefed up in Brisbane owing to the Sydney terrorist attack with the Board of Control for India (BCCI) keeping a close watch on the unfolding events there.
“We are constantly in touch with Cricket Australia top bosses. We are monitoring the situation closely and security of our players is paramount. The players are in Brisbane and everything is normal there,” BCCI Secretary Sanjay Patel told PTI.
“However, the security of the Indian team has been beefed up considerably. We have been informed by Cricket Australia that additional police forces have been deployed with the Indian team. We are happy with what CA has arranged,” he added.
An armed man on Monday took undisclosed number of people hostage at a popular cafe in Sydney and displayed an Islamic flag with Arabic script in the window, sparking a security alert in Australia.
Authorities sealed off surrounding streets, evacuated people from buildings, and suspended rail services following the incident at the Lindt Chocolate Cafe in Martin Place, in the heart of the Sydney’s business district. Martin Place is a public pedestrian thoroughfare through the heart of Sydney, joining its parliamentary, legal and retail districts.
Television footage showed people inside the cafe with their hands pressed against the window holding the black flag known as Shahadah, a prayer spoken in mosques daily, and not a flag specific to the Islamic State. India are currently playing a four-match Test series in Australia with the second Test due to start on Wednesday in Brisbane.
Asked if the incident could have an impact on the fourth Test of the series scheduled in Sydney from January 6, Patel said it was too early to comment on that.”We haven’t reached that stage as next Test is in Brisbane. It’s too early to comment on the fate of the Sydney Test. We are confident CA will take appropriate measures to ensure safety and security. At this point I can’t say anything about Sydney Test. For us the tour is still on,” said Patel.