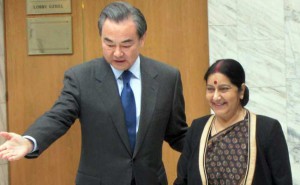 MOSCOW: In a strong rebuke to China, Foreign Minister Sushma Swaraj has objected to Beijing blocking a United Nations ban on Masood Azhar, the chief of terror group Jaish-e-Mohammed, which is based in Pakistan.
At a speech in Moscow at a summit that includes Russia and China, Ms Swaraj warned that fighting terrorism through joint action at the UN is imperative. “If we continue to adopt double standards in dealing with terrorism, it will have serious consequences not just for our own countries, but the international community as a whole,” she said.
Before that, Ms Swaraj met Wang Yi, her Chinese counterpart, and brought up the last-minute objection made by China at the UN Security Council that prevented Azhar from being designated a terrorist by a committee that deals with sanctions.
India says Azhar masterminded January’s attack on the Pathankot air force base near the border with Pakistan; seven military personnel were killed in the deadly and lengthy terror strike.
India considers Masood Azhar the mastermind of the Pathankot attack.China has justified its decision last week, saying its stance was “fair and based on facts”.

After the Pathankot attack, India filed its application with the UN Sanctions Committee to have Azhar designated a terrorist. After the evidence was reviewed by the 15 members of the Security Council, China objected at the last minute to the proposal, placing a “technical hold” on the move. India has said that amounts to a dangerous “hidden veto”.

The UN had banned the Jaish-e-Mohammad (JeM) in 2001, but India’s efforts to have sanctions imposed on Azhar failed after China, which has veto powers, intervened, allegedly at the behest of Pakistan.
Last year, China blocked India’s move at the UN for sanctions against Pakistan after Zaki-ur-Rehman Lakhvi, who masterminded the 26/11 attacks in Mumbai, was released from jail.