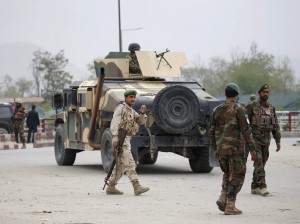 KABUL:  In Afghanistan, several people have been killed and more than 200 injured in a huge explosion in the centre of the capital Kabul, officials say.
According to Aljazeera TV at least 22 people were killed. Interior ministry spokesman Sediq Sediqqi said a suicide attacker had detonated a vehicle. Gunfire can still be heard. A Taliban spokesman said the group carried out the attack.

Today’s bombing happened during the morning rush hour in a residential neighbourhood close to the ministry of defence and military compounds. There are unverified claims that Taliban fighters managed to breach the defences of the National Directorate of Security, the main spy agency which protects high-ranking government officials.
The blast was carried out by a suicide bomber in a car and possibly one or two bombers are still resisting, Mr Sediqqi said. The scene of the attack has been completely cordoned off by Afghan security forces.
President Ashraf Ghani condemned the attack “in the strongest possible terms” in a statement from the presidential palace, only a few hundred meters away from the scene of the blast in central Kabul.
According to News Agency Reuters – Taliban militants attacked an office of Afghanistan’s main security agency with a suicide car bomb and gunfire on Tuesday, killing several people and wounding over 200, in their first assault on the capital since declaring a spring offensive.
The attack began with a suicide car bomb during the height of the morning rush hour, and security forces and militants then exchanged gunfire, Reuters witnesses near the scene said.

The Health Ministry said civilians and members of the Afghan security forces were among those caught in the attack, and several people had been killed and more than 200 wounded.Those casualty numbers were expected to rise, said ministry spokesman Ismail Kawosi.
The Taliban announced the beginning of their spring offensive on April 12, and fighting has raged around the symbolically important northern city of Kunduz since then, although the capital had been relatively quiet.
Kunduz, Afghanistan’s fifth-largest city, fell briefly to the Taliban last September in the biggest blow to Ghani’s government since NATO-led forces ended their combat operations at the end of 2014.
The Taliban said on their Pashto-language website that they had carried out the suicide bombing on “Department 10,” an NDS unit which is responsible for protecting government ministers and VIPs.
They said a suicide car bomber blew up the main gate at the front of the office, allowing other fighters, including more suicide bombers, to enter the heavily guarded compound.

Taliban spokesman Zabihullah Mujahid said in a separate statement that the attackers were engaged in a gun battle with Afghan security forces inside the building.
It was not immediately possible to verify the details of the Taliban’s claim with government officials. The Islamist group often exaggerates details of attacks against government and military targets.
The Taliban-led insurgency has gained strength since the withdrawal of most international combat troops, and the Taliban are believed to be stronger than at any point since they were driven from power by US-backed forces in 2001.

A thick plume of black smoke was seen rising from the area near the sprawling US embassy complex in the center of Kabul immediately after the blast.Warning sirens blared out for some minutes from the embassy compound, which is also close to the headquarters of the NATO-led Resolute Support mission.
Meanwhile , The US embassy and the NATO mission both said they were not affected by the blast.