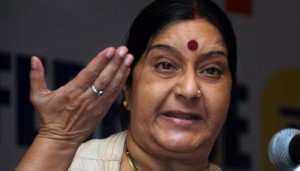 NEW DELHI: External Affairs Minister Sushma Swaraj on Saturday said she has not recommended travel documents for the former IPL honcho Lalit Modi who is wanted by the Enforcement Directorate for the his alleged role in money laundering.
The Minister, whose resignation is being demanded by the Opposition for helping Mr. Lalit Modi, stressed that she had left it to British authorities to take a decision on his plea for documents.On Saturday, replying to a tweet, Ms. Swaraj said: “You got it right. I am saying this time and again that I never requested or recommended travel documents for Lalit Modi”.
In response to questions on her involvement in securing documents for Mr. Modi, she tweeted: “I left this to the UK Government to decide under their own laws and regulations. And that is what they did.”
On June 14, 2015, the Minister had tweeted that sometime in July 2014, Mr. Lalit Modi had spoken to her about his wife suffering from cancer and her surgery that was fixed in Portugal, for which he had to be present in the hospital to sign the consent papers.

She had also tweeted that she had been informed that the U.K. government was prepared to give Mr. Lalit Modi travel documents, but they were restrained by a UPA government communication that this would spoil India-U.K. relations.
“Taking a humanitarian view, I conveyed to the British High Commissioner that, British Government should examine the request of Lalit Modi as per British rules and regulations. If the British Government chooses to give travel documents to Lalit Modi – that will not spoil our bilateral relations,” Ms. Swaraj had earlier stated in her tweets.
But on Saturday, the Minister asserted that role had been incorrectly portrayed and that despite her offer to make a statement in Parliament, “falsehoods” are being spread. “I accepted a debate on the very first day of the Parliament session. Congress members are not allowing a debate,” she tweeted.
The first week of the monsoon session was a washout as an aggressive Opposition has been demanding the resignation of Ms. Swaraj for helping an “absconder”.
Replying to another question on why she has not addressed the press to clarify her stand, Ms. Swaraj said in her tweet: “As a Minister I am accountable to the Parliament. That is the only forum to inform the nation.”
She also denied any special favour to the former IPL boss by stating: “I help people every day. That too on a single tweet” and also said that Mr. Lalit Modi’s wife had been suffering from cancer for the last 17 years and this was the 10th recurrence of cancer.