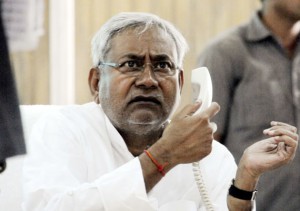 PATNA: As Prime Minister Narendra Modi landed in Bihar to kick-start his party’s poll campaign, Chief Minister Nitish Kumar Saturday launched an attack on him, posing seven questions to him on retrieval of black money, farmers’ issues and the promises he had made to the state during Lok Sabha polls.
“I am raising 7 critical issues-2 specific to Bihar and 5 that in my view people across India want to hear from the Prime Minister,” Kumar said in a tweet.
Taking a dig at the Prime Minister, he said, “We’re grateful after 14 months Modiji finds time to visit Bihar as we get ready to hear more promises what about the old ones?”
“You promised special status for Bihar. 14 months and people are still waiting,” the chief minister said in his posers to the PM.”With 14th Finance Commission report and withdrawal of BRGF (Backward Regional Grant Fund), Bihar to lose Rs 50,000 crore in five years. Is this your cooperative federalism?” he asked.

“People are awaiting to get their Rs 15-20 lakh from the black money you promised to bring back from abroad. Could we hear something on this?” he asked.
“First U-turn on MSP, then your apathy towards farmers’ distress and finally your new land bill. Is this what you promised to farmers?” he asked.
“By 2022 you have promised house for everybody with facility of electricity and water. How would be fulfilled without allocation of fund or any plan so far?” he asked.
“You started Jan Dhan scheme in the way to make people believe that it’s not only a bank account, but it’s opening peoples fortune. Today more than 70 per cent accounts are ineffective. Nobody knows how poor would be benefited from such bank accounts?” he asked.
Kumar also alleged that a few capitalists had benefited from the central government and asked when ‘acche din’ would come for the common man.
With PM visit to Bihar coming ahead of crucial Assembly Elections, Kumar, whose hostility towards him is well known, has set the stage for political fireworks by posing the questions.