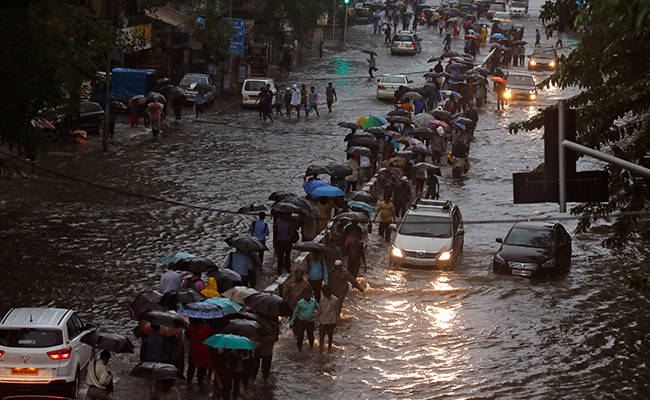 MUMBAI: At least six people have died in rain-related incidents in the city in last 24 hours. While three including two minors lost their lives in separate house collapse incidents, a 32-year-old woman and a teenage girl died in other rain-related incidents in Thane. On Wednesday, body of a 30-year-old lawyers was recovered from the suburban.
The storm that lay over Mumbai has now moved towards Gujarat and the Met office has forecast heavy rain in the state in the next 2 days. There is a “red alert” sounded for heavy rain also for Konkan, Goa, Madhya Pradesh and central Maharashtra.
The official also said teams of the National Disaster Response Force (NDRF) are on alert and the Navy too has kept divers and choppers on standby to evacuate people if needed. Five teams of the National Disaster Response Force (NDRF) have been deployed to rescue people.

The Navy has divers and choppers on standby and its cadets ran food camps and arranged shelter for people stuck in areas like Colaba, Worli and Ghatkopar. Flight operations are normal this morning at Mumbai airport, the airport offiial said.  Poor visibility forced diversion and delay of at least 10 flights on Tuesday.
Charan Singh, Director, India Meteorological Department, said a ‘Red’ warning has been issued for the next 24 hours for the city and adjoining areas, indicating there could be very heavy rainfall. He said the city and surrounding areas would continue to receive heavy rainfall over the next 2-3 days.Mumbai received 298 mm of rainfall over a period of 9 hours on Tuesday, nine times more rain than the average, an IMD official said. The spell of heavy rains is likely to continue today as well, he added.

The city and its suburbs virtually have a public holiday today with Maharashtra Chief Minister Devendra Fadnavis advising people to stay back home unless there is an emergency. “However, the essential services and critical staff in the government will be on duty today,” Fadnavis said. Schools and colleges have been asked to remain shut by authorities amid indications of a fresh spell of heavy showers in the megapolis.
Meanwhile, suburban train services on the Central Railway (CR) mainline resumed this morning after remaining suspended for nearly 20 hours due to heavy downpour. The first train left the Chhatrapati Shivaji Maharaj Terminus (CSMT) for Kalyan at 7.26 am, an official said.

He said services on other sections like Kalyan to Karjat, Kalyan to Titwala and Thana to Kalyan were also operational. Udasi said since there is still water-logging at Kurla, it may take some more time for the Harbour line trains to get back on track. This line is also operated by the CR.

Services on the suburban corridor of the Western Railway (WR) are also back on track. Trains on this section resumed around midnight last night and more services were started around 7 am. The suburban train network, which carries over 65 lakh passengers a day, is the lifeline of the financial capital and yesterday’s rain-enforced disruptions caused severe inconvenience to commuters.

raffic jams were reported on all major arterial roads, including the Eastern and Western Express Highway, Sion-Panvel highway and LBS Marg. Waterlogging was reported in the low-lying areas of Parel and Sion.
(with Agency Inputs).