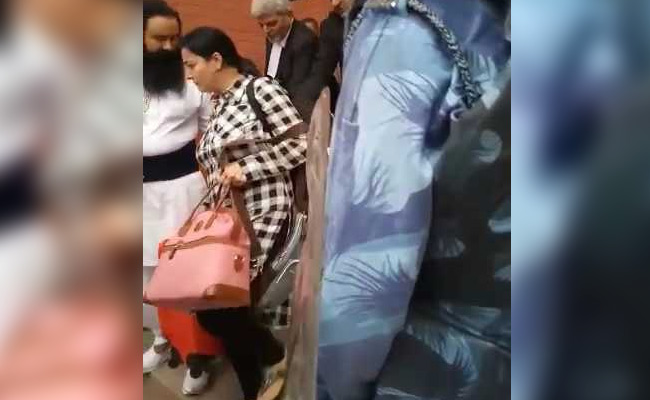 NEW DELHI : While taking Gurmeet Ram Rahim Singh to jail after he was held guilty of rape last week, the Haryana police stymied an attempt by the self-appointed spiritual leader’s “commandos” to free him, a senior officer said on Wednesday. The 50-year-old chief of the Dera Sacha Sauda has been sentenced to 20 years in jail for raping two followers.
Soon after he was declared guilty by a court in Panchkula on Friday, Ram Rahim demanded a “red bag” that he had brought from Sirsa, the main base of his Dera Sacha Sauda sect. “The Dera chief demanded the bag, saying his clothes were in it. It was actually a signal for his men to spread the news of his conviction among supporters so that they could resort to causing disturbance,” Inspector General of Police KK Rao told reporters yesterday.
As the bag was taken out of the Baba’s SUV, sounds of tear gas shells were heard about 2-3 km from the court, the officer said.”It was then that we understood that there was some meaning behind the signal,” Mr Rao commented. The policemen also suspected something off when Ram Rahim Singh and his “adopted daughter” Honeypreet Insaan – who is always by his side even escorted him to a jail in Rohtak – kept lingering in the corridor of the Panchkula court complex and appeared to be buying time.

“They were trying to gain time before sitting in the vehicle so that their men could spread the message that he was moving from the court. They were told that you cannot stand here. The mob was about 2-3 km and could have moved closer. We never wanted violence as casualties could have been more,” Mr Rao said.
The police decided to shift him from his own SUV to the car of a police officer, Sumit Kumar. When they were trying to get him to move, Ram Rahim’s security guards ringed around him, Mr Rao alleged.The Dera chief’s “commandos” – who were armed – came to blows with the police and were even thrashed.
“We took good care that no firing takes place,” Mr Rao said.

The policemen also sensed a threat from some 80 cars and SUVs that had followed the controversial Ram Rahim from Sirsa to Panchkula and were parked next to a nearby theatre. So a plan and a route change were quickly devised. “Our priority was to first take Ram Rahim to the chopper site… We did not want to use the same route as 70 vehicles were standing. People in those vehicles might have been carrying weapons,” he said.
“I asked an Army man to allow the police vehicles (including the one carrying Dera chief) to move through the cantonment area. Had their people come to know about our movement, they would have reached there and firing could have taken place,” the police officer revealed.

“As we were about to proceed towards the cantonment area, the Dera chief’s private commandos forcibly clung to the police vehicle. They were again thrashed and taken into custody.” It was a tense cat-and-mouse game until Ram Rahim was inside the special chopper that was to take him to the Rohtak hail.

“The Baba’s men were clueless for over half an hour as to where he had been taken,” Mr Rao remarked. “We came to know about the escape plan when the red bag was demanded. Secondly, they were trying to gain time. Thirdly why men in 70 vehicles were standing?”ndtv.